Asian airline shares were mixed on Friday (24-Jun-09), despite stronger conditions on Asian equity markets. Among the gainers, Malaysia Airlines and Air Arabia led the way, up 4.6% and 4.1%, respectively. Japan Airlines also gained, up 0.6%.

In the Indian market Kingfisher gained 0.3% with Jet Airways up 0.4% and SpiceJet improving 0.8%. Jet Airways, on Friday, announced plans to raise USD400 million through a capital increase, subject to necessary approvals, with the carrier also planning to complete the process of replacing expatriate pilots with Indian national pilots by the end of FY2009/10 (to Mar-2010), as part of cost saving measures. Of the carrier’s 1,100 pilots, 250 are expatriates.

Leading the decliners on Friday was China Airlines, down 1.9%, while Cathay Pacific and Qantas were also lower, down 0.8% and 0.5%, respectively. Following Thursday’s 4.7% gain, Thai Airways share price was also down, slipping 1.5%, after it announced that it had reached an agreement with Airbus to defer the delivery of six A380 aircraft from late 2010 to Dec-2012, “to reflect the current market conditions”. 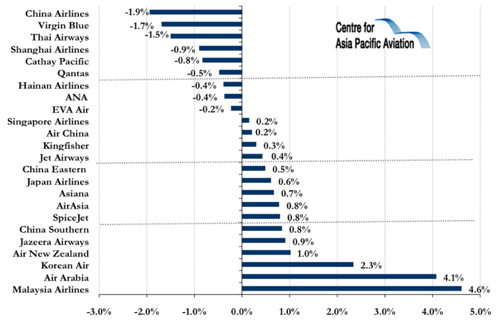