Jazz Air Income Fund stock nosedived on Tuesday (09-Nov-2010) on concerns its proposed dividend is not sustainable and expectations of a weaker 2011, following comments from management. A number of analysts cut their forecasts for Jazz as a result.

The analyst downgraded Jazz from "buy" to "hold", but maintained a price target of CAD5.50. Mr Mills attributed his weaker outlook for Jazz for 2011 to poorer profitability as a result of Jazz’s contracts with Air Canada and Thomas Cook.

Also during trading, Jazz’s unitholders approved the previously announced proposed conversion from an income trust to a corporate structure pursuant to a court-approved plan of arrangement with 99.9% of the votes cast in favour of the conversion. The arrangement is expected to be completed on 31-Dec-2010. The fund's new long-term incentive plan, under which participants may be granted restricted share units that vest over time or if specified performance goals are achieved, was also approved.

Air Canada (-6.5%) fell with Jazz. It also declined on a report from Chartered Financial analyst Fabrice Taylor stating that although Air Canada stocks are attractive for short term trade, it is “no buy-and-hold investment”. The analyst stated the carrier has made “excellent progress on costs and customer service, but so-called legacy … nearly always self-destruct in the long run”.

JetBlue (-5.9%) was also down after Sidoti downgraded its rating of the carrier’s stock from "buy" to "neutral".

Copa Airlines passenger numbers up, but load factor down 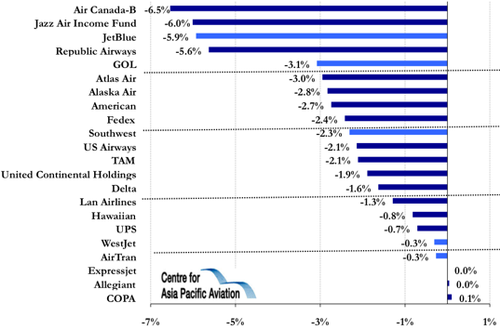