Jazeera Airways (+2.0%) was one of the day’s biggest gainers on Thursday (25-Mar-2010) after Board Director, Marwan Boodai, reportedly announced during trading that the carrier will release its “biggest ever sale” to launch its Summer seasonal destinations in 2010, namely Antalya, Hurghada, Larnaca and Salalah.

Also in the Middle East, Air Arabia (+1.0%) was also up, while Kuwait National Airways was flat. Middle Eastern stocks were mostly improved on Thursday after the Dubai Government stated it would provide Dubai World with up to USD9.5 billion to assist it with its debt restructure.

In Africa, Comair (-0.4%) slipped. The carrier entered an agreement with the Mpumalanga Tourism and Parks Agency (MTPA) to expand its domestic route network to include Nelspruit (Mbombela). The carrier will launch six times weekly Johannesburg-Kruger Mpumalanga service on 04-May-2010. Under the British Airways livery, Comair currently offers services between Johannesburg and Cape Town, Durban, Port Elizabeth, Harare, Livingstone, Victoria Falls, Windhoek, Mauritius and between Cape Town and Durban.

Elsewhere, 1time Holdings (-4.7%) took the biggest fall of the day, while Kenya Airways (-1.6%) was also down, ending its four day rally. The Kenyan All-Share Index (+0.7%) meanwhile continued to rise for a fourth consecutive day. Lonrho was flat. 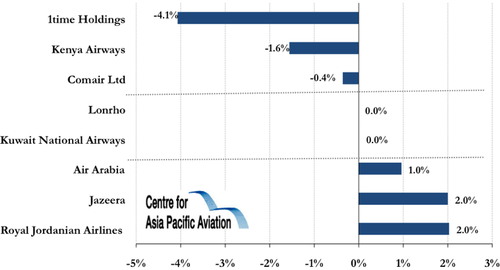