Investors in Asia had their first chance to react to a surprise North Korean attack on the South, and after an initial sell-down, buying quickly resumed across the region. With the exception of AirAsia (-1.2%) and Cebu (-1.4%), Asian LCCs all firmed, led by SpiceJet (+3.8%), Virgin Blue (+2.3%) and Tiger (+1.1%). Further west in Kuwait, shares in Jazeera Airways shot up 9.8%. The LCC was the biggest gainer on the KSE.

Virgin to use cost advantage to gain corporate foothold

Virgin Blue (+2.3%) boss John Borghetti yesterday affirmed plans to take a larger share of Australia’s corporate travel market. The CEO said Virgin plans to have a 15-20% market share within two years. Mr Borghetti plans to lever Virgin’s lower unit costs in its pursuit of the high-yielding business traveller. Qantas’ share of the corporate travel market in Australia is estimated at 85%.

Mr Borghetti wouldn’t provide an earning forecast although he stated trading conditions are “improving”. Local yields are holding up while the V Australia international arm is on track to break even (or get close to break even) by Jun-2011. Mr Borhgetti added: “We are looking to strategic initiatives to improve margin in the second half of 2011/12.”

US and European LCCs all up

In the US, markets rallied ahead of today’s Thanksgiving holiday. Confidence was boosted by better-than-expected economic data which saw investors return to equities. LCC shares were led up by JetBlue (+4.2%), Ryanair (+2.8%) and Southwest (+2.5%). 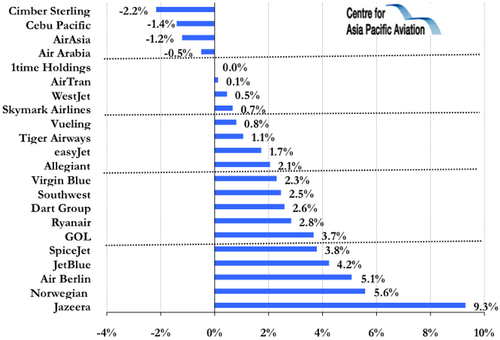