Jazeera Airways' (+2.4%) shares gained on Wednesday (12-Mar-2010) after announcing short-term expansion plans at Kuwait International Airport. The work includes the construction of seven additional gates by the end of 2010, as an interim measure before the construction of a dedicated terminal at the airport.

The carrier announced plans last week plans to construct a dedicated terminal at the airport at a cost of USD50 million. The terminal is due for completion mid to late 2012. Also during trading, the carrier launched three times weekly Kuwait-Lahore service.

Air Arabia (+0.1%) was also up marginally, as the Dubai Stock Exchange gained. Kuwait National Airways was flat, while Royal Jordanian (-0.6%) slipped with the Amman Stock Exchange (-0.7%). 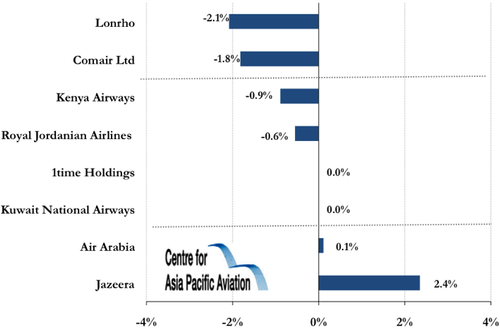