Jazeera Airways Group shares gained 9.6% on Monday (08-Nov-2010), posting the largest gain on the KSE Market Index that day despite the market declining for the second consecutive day. On the same day, the carrier reported the following financial highlights for the three months ended 30-Sep-2010:

Jazeera CEO Marwan Boodai attributed the airline's profitability to "the right fleet size on profitable routes". The airline, which adopted a turnaround plan in May-2010, accessed global leasing markets and placed four A320s on long-term lease with Virgin America. The carrier reported its best quarterly result since its establishment in 2005 in 3Q2010. The carrier stated it has been capturing market share on all the routes it operates, with the exception of its destinations to Saudi Arabia, where it is restricted to a lower seat capacity compared with other airlines.

Air Arabia plans to take delivery of another aircraft before the end of 2010 with six more scheduled for delivery in 2011. The carrier has secured USD160 million in finance for the first four aircraft with the Bank of Japan adding that the carrier is "working very closely with the European credit agencies for the financing of the planes". The carrier has ordered 44 aircraft valued at USD3.6 billion with 43 yet to be delivered. The aircraft will be delivered over the next three years expanding the carrier's fleet to 79 aircraft. 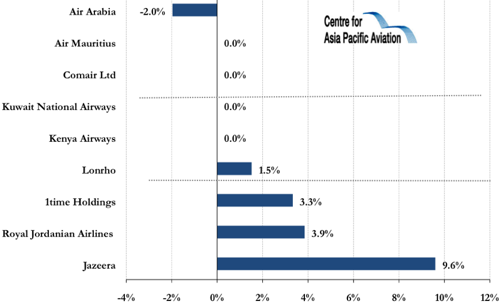