Jazeera Airways' (-2.3%) shares were down on Thursday (13-May-2010) despite receiving shareholder approval to fund the acquisition of Sahaab Aircraft Leasing by raising the company's capital to USD144.8 million through a rights issue of 200 million shares. The acquisition will appear in Jazeera Airways' 2010 consolidated results and Sahaab will continue to operate as a subsidiary of Jazeera Airways.

Royal Jordanian Airlines (0.6%) was the only carrier to increase of the Middle East/African carriers tracked by CAPA's Middle East-Africa Airline Daily, following a 0.3% gain in the Amman Stock Exchange. 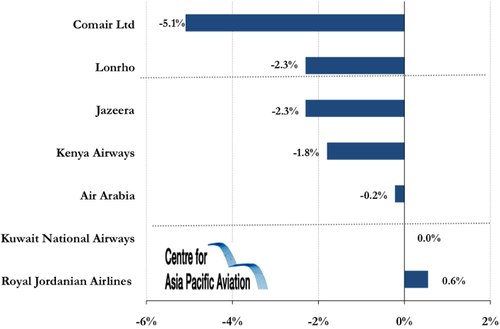