Jazeera Airways' (-1.0%) shares declined on Friday (26-Mar-2010) after the carrier reported a net loss of USD28.5 million for the 12 months ended 31-Dec-2009, compared to a net profit of USD15.6 million in the previous corresponding period. The carrier also reported revenue for the period of USD159.7 million, while passenger numbers totalled 1.8 million.

Chairman, Marwan Boodai, stated the carrier was able to navigate the “tough business environment”, working to seize a leading market share during the year. As a result, the LCC became the largest operator in Kuwait in 3Q2009.

Royal Jordanian (-0.5%) was also down. The carrier launched four times weekly Amman-Madinah service on 28-Mar-2010, an increase from the previously announced twice weekly frequency on the route. RJ added that it plans to resume service to Kuala Lumpur in Jun-2010 and is considering launching services to Johannesburg, Tehran, Izmir, Luxor and Aswan.

Also in the Middle East, Kuwait National Airways was flat. Subsidiary, Wataniya Airways announced the arrival of its fifth A320 aircraft and plans to launch Kuwait-Istanbul Ataturk service on 02-May-2010. Istanbul will be Wataniya Airways' ninth destination and the first European city that it operates to. The carrier is scheduled to receive its sixth aircraft in Jun-2010.

In Africa, Kenya Airways (-1.6%) shares were down for the second consecutive day on Friday, after the Kenyan All-Share Index fell for the first time in five days. However, the decline was only slight, slipping less than 0.1%. 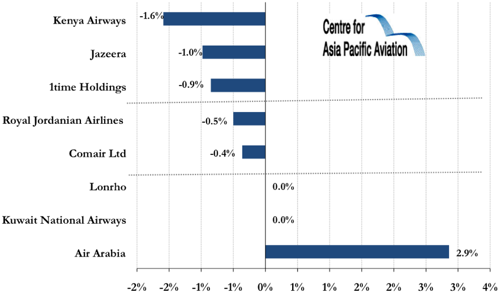