Middle East and North American carriers were down on Friday (14-May-2010) as wider markets sunk on continued concerns over euro zone debt issues. Air Arabia was the only carrier not to decline.

Jazeera Airways (-2.4%) was down after earlier in the week reporting a net loss of USD15.5 million for the three months ended 31-Mar-2010. The decline was despite the carrier reporting revenue of USD31.7 million for the period.

Chairman, Marwan Boodai, stated that despite the poor performance for 1Q2010, the carrier remains "upbeat" that it will close 2010 with a profit, "driven by the turnaround initiatives that were put in place in fourth quarter 2009 and first quarter 2010".

Also in the Middle East, Kuwait National Airways (-1.9%) fell, despite a 0.7% rise in the Kuwait Stock Exchange for the week. Royal Jordanian (-1.1%) was also down. 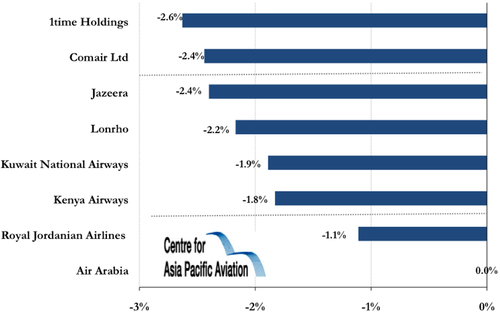