Jazeera Airways' (+2.1%) shares made gains after the carrier announced it has fully acquired Sahaab Aircraft Leasing Co (Sahaab), a private aircraft leasing firm, for KWD25.6 million. The acquisition gives Jazeera Airways a platform to "pursue strategic vertical integration initiatives" lined up for 2010 and 2011 that include an airline acquisition and access to global leasing markets.

Sahaab currently owns a fleet of nine Airbus A320s that were purchased and leased back to Jazeera Airways, and will continue to operate as a fully-owned subsidiary of the airline, catering not only to Jazeera Airways but also other airlines, both regionally and globally. Sahaab will have a minimum fleet of 38 Airbus A320s by 2016 based on confirmed orders with the manufacturer.

The acquisition is expected to be completed by 31-Mar-2010, allowing Jazeera to consolidate Sahaab’s earnings from 01-Jan-2010, adding an expected KWD1.2 million in earnings for 1Q2010.

Royal Jordanian (-0.5%) shares meanwhile fell despite the airline reporting during trading a net profit of JOD28.6 million for FY2009, compared to a net loss of JOD24.7 million in the previous corresponding period.

The carrier reported a 14.6% year-on-year decline in operational revenue, to JOD598 million, which it attributed to the impact of the global economic crisis on travel and tourism and also to a "remarkable regression" in cargo.

Operational costs fell faster, by 19.1%, to JD546.8 million, due to lower oil prices, which led to a 47% decline in the airline's fuel bill. The carrier stated its cost control policy and capacity management programme also played key roles in reducing costs.

Elsewhere in the Middle East, Air Arabia (+1.1%) was up, while Kuwait National Airways was flat. In Africa, 1time Holdings (-0.9%) shares were down, while Comair, Kenya Airways and Lonrho were all flat. 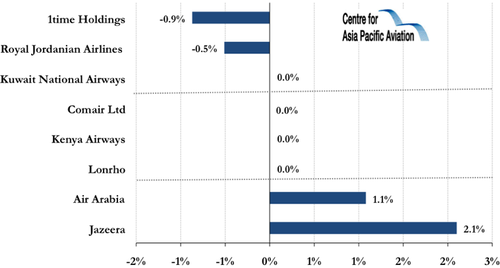