Sahaab Aircraft Leasing was launched in Oct-2008 to acquire and lease high-utility commercial aircraft for customers. It was originally formed as a JV with NBK Capital (a unit of the National Bank of Kuwait) and transport and infrastructure financing specialist, DVB Bank and had Jazeera Airways as its first customer. Jazeera Airways Group then acquired Sahaab in Feb-2010, as part of the Group's vertical integration strategy of investing in services that compliment passenger airline operations.

To assist with the capital increase, Jazeera shareholders in Sep-2010 approved raising the carrier’s capital from KWD22 million (USD78.1 million) to KWD42 million (USD149 million) by issuing 200 million new shares with a nominal value of 100 fils. Shareholders approved the rights issue without a premium “in line with the prevailing stock market conditions” according to the carrier.

The carrier views the acquisition as the first step of a phased vertical integration strategy. Sahaab will continue to operate as a subsidiary of Jazeera Airways. Jazeera Chairman Marwan Boodai has said that the acquisition of an aircraft leasing vehicle “enables Jazeera Airways to be in control of its own destiny whenever possible, and not have its future or financial performance impeded or be at the mercy of government entities or unfavourable market conditions".

The leasing company now has six A320 aircraft placed with Jazeera Airways, four A320s aircraft placed with Virgin America and one A320 with a third undisclosed customer. Its agreement with Virgin America was signed at the start of Oct-2010 under 10-year leases. The contract, valued at USD155 million, is Sahaab's first lease to a US-based customer.

The acquisition of Sahaab was part of Jazeera’s Turn-Around Plan (TAP), launched in May-2010. Mr Boodai stated that under the TAP, Jazeera has been working to reduce costs, optimise its route network and ensure it is operating the right amount of capacity “given the overcapacity we've seen dumped in our market over the last year and beginning of this year”. The acquisition of Sahaab has allowed the carrier place its excess aircraft on leases with other carriers, introducing a new stream of revenue for the carrier. On top of the six A320s Jazeera operates at present, the carrier has plans to take delivery of a further 29 A320s between 2012 and 2016. 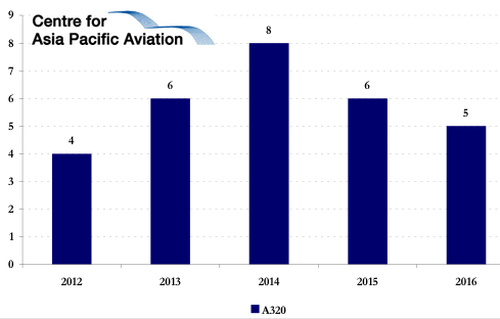 Mr Boodai stated the acquisition of Sahaab “brought immediate benefits to our business as planned”, including “consistent and stable” revenue and access to global leasing markets. Jazeera now sees additional opportunities opening in the leasing market, thus increasing Sahaab’s capital to take advantage of these opportunities.

Mr Boodai attributed the carrier’s improved financial performance in 3Q2010 to the TAP. Jazeera reported its best quarterly result since its establishment in 2005, with a net profit of KWD4.4 million (USD15.8 million) for the three months ended 30-Sep-2010. The 3Q2010 result was on revenue of USD50.3 million for the quarter. Jazeera also reported an operating profit of USD12.3 million.

The most recent performance was Jazeera’s first quarterly profit since 3Q2009, when the carrier reported a profit of USD2.7 million. The third quarter of the year typically yields profits for the carrier and Jazeera Airways has historically made the majority of its profits in the second half of its financial year. The 3Q2010 net profit follows a loss of USD32.2 million in the six months ended Jun-2010, as a result of losses in both 1Q2010 and 2Q2010. The result was compared with a loss of USD7.8 million in the previous corresponding period. 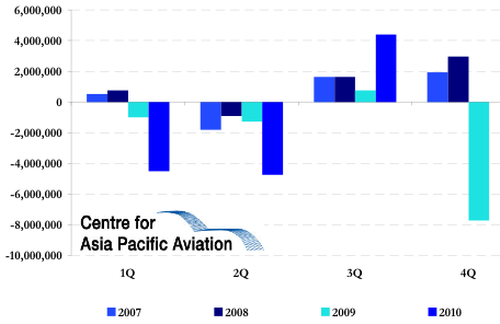 COO Reinhard Kossack stated in May-2010 that he is “sure” Jazeera will generate a profit this year, after reporting a loss of KWD8.2 million (USD29.1 million) for FY2009. Jazeera had previously been among the few consistently profitable carriers in the region. However, in 2009, it faced lower-than-expected traffic and distinctly tougher competition in the Middle East, particularly in the low-cost segment. This was combined with an unanticipated increase in fuel prices, which only added to an already difficult situation.

In terms of traffic, the carrier handled 365,163 passengers for 3Q2010, with a load factor of 70%. Jazeera also exceeded the 1 million passenger mark for the year in Sep-2010, bringing the total flown passengers since 2005 to 6.5 million, or two times the population of Kuwait. On-time performance for the quarter was 94%.

Jazeera handled 1.8 million passengers in 2009, a 32% year-on-year improvement. However, this was less than its target of 2.5 million, as it was unable to increase passenger traffic at the same rate as capacity. 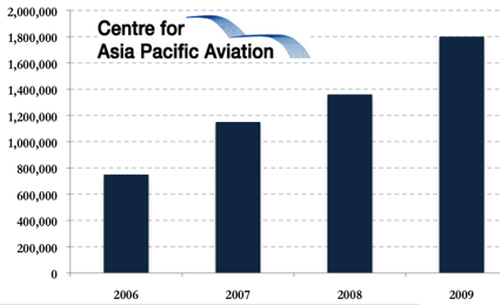 The carrier has been growing its market share, reporting a 40.1% share of the Kuwait market for 3Q2010. More recently, Jazeera stated in Dec-2010 that it had continued to "capture a leading market share among all Kuwaiti airlines on the majority of routes it served" during Oct-2010, with the exception of the Kuwait-Jeddah and Kuwait-Riyadh routes, where it has lower seat-allocation restrictions compared with other Kuwaiti airlines.

According to OAG, Jazeera has a 15% share of capacity at Kuwait Airport, making it the second largest carrier behind national carrier, Kuwait Airways. 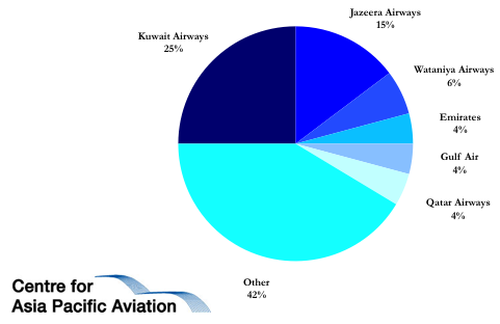 Jazeera also has the second-largest share of frequency to/from Kuwait Airport, with a 13.3% share of total frequencies. For the week commencing 13-Dec-2010, Jazeera operated 32,670 seats to/from the airport. 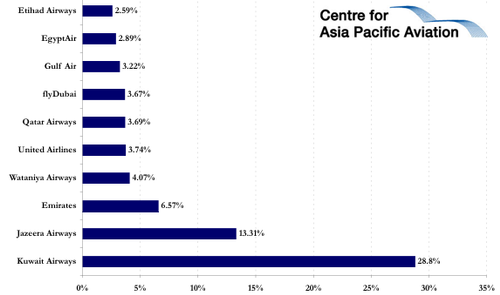