Jazeera Airways (-1.7%) stated (11-Dec-2010) it has continued to "capture a leading market share among all Kuwaiti airlines on the majority of routes it served" in Oct-2010, with the exception of the Kuwait-Jeddah and Kuwait-Riyadh routes, where it has lower seat-allocation restrictions compared to other Kuwaiti airlines.

Jazeera Airways continued to be the airline with largest market share on routes including the Kuwait-Beirut route (31% market share), the Kuwait-Amman route (35%), the Kuwait-Alexandria route (46%) and the Kuwait-Damascus route (43%). The carrier was also the largest operator on Kuwait-Istanbul sector (13%), Kuwait-Sharm El Sheikh route (48%) and Kuwait-Luxor route (51%). The airline also recorded an on-time performance of 95% in Oct-2010, "making it one of the most punctual airlines in the Middle East". 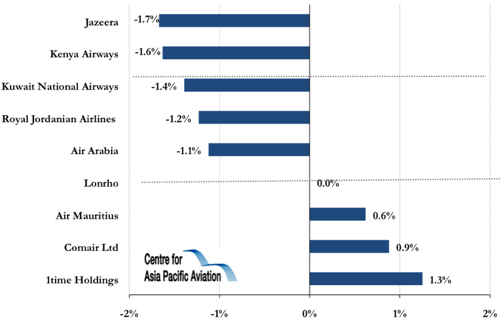