Air Arabia's Maroc (-0.5%) subsidiary appointed on Friday (02-Jul-2010) AVIAREPS as their General Sales Agent (GSA) in two additional markets: Italy and France. With immediate effect, AVIAREPS will take over responsibility for the airline’s sales, marketing and ticketing activities within the countries.

Meanwhile, Jazeera Airways (-1.9%) announced in its performance report for May-2010, it had gained the leading market share among Kuwait-based airlines on the most competitive routes served from Kuwait, including to Amman, Bahrain, Beirut, Damascus, Dubai, Luxor and the resort city of Sharm El Sheikh. 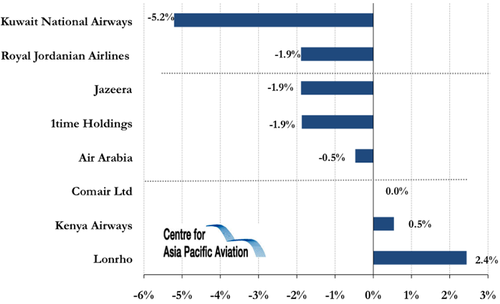