Jazeera Airways (-6.7%) was the only decliner in the Middle East on Monday (10-May-2010) despite stating over the weekend that it expects to generate a profit in 2010.

The carrier stated it is less dependent on financing with the full takeover of Sahab Aircraft Leasing Co in Feb-2010 for USD88.4 million. The carrier also plans to raise its capital by 91% through a rights issue announced in Apr-2010.

However, Jazeera also announced plans to defer the delivery of two A320 aircraft, due in 2011, to an undisclosed date. The carrier has orders for 29 A320 aircraft scheduled to be delivered up until 2014. This has now been extended to 2016. Mr Kossack added the carrier could “change that” if the “economy picks up”. The carrier has reduced its fleet from 11 to six aircraft, with one removed from its fleet and four leased out to other carriers. The airline plans to lease out a fifth aircraft in the coming weeks.

Elsewhere in the Middle East, Royal Jordanian (+3.4%) gained despite a 1.8% decline in the Amman Stock Exchange. Kuwait National Airways (+2.0%) also made strong gains, as the Kuwait Stock Exchange rose 1.7%. Air Arabia (+0.6%) was also up.

In Africa, Lonrho (+4.2%) was the only to make gains, moving higher with European markets. The company’s shares trade on the UK AIM and South African JSE indexes.

Kenya Airways and Comair were both flat, while 1time Holdings (-0.9%) slipped, despite the JSE rallying 4.3% as it moved higher with global markets. 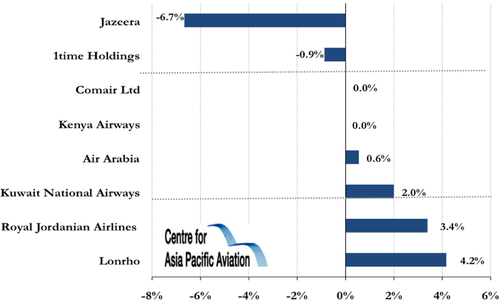