Air Arabia (-0.3%) shares dropped slightly on Wednesday (25-Aug-2010), on the same day the carrier announced that passenger traffic between Sharjah and other GCC destinations reached 551,041 in 1H2010, a 16.8% year-on-year increase, with an average load factor of 81.8%. The carrier operated 83 weekly services from its hub in Sharjah to nine destinations in the GCC in the period.

Jazeera Airways (-6.7%) stated it is cancelling a premium on a planned rights issue and added that it expects support from its shareholders and lenders to provide liquidity. The carrier was planning to issue 200 million shares at 150 fils per share (including the premium) to raise its capital by 91% to KWD42 million (USD145.5 million), but was advised by its Board of Directors to cancel the 50 fils premium.

The carrier also stated part of its auditors report was mistakenly dropped from its results announcement 12-Aug-2010, with the missing part outlining that the company's current liabilities exceeded its current assets, and its "management expects that its plans and work strategies ... in addition to financial support from shareholders and lenders will provide the needed liquidity to meet its dues". 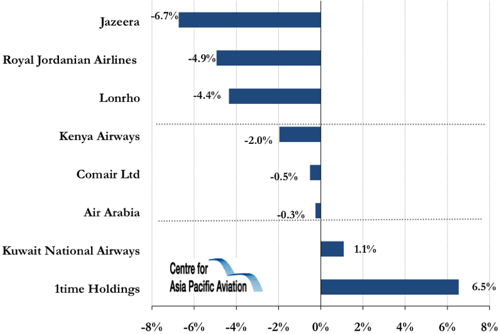