Jazeera Airways was flat at the end of trading on Friday (09-Apr-2010), due to a decline in major indicators and a majority of sectors on the Kuwait Stock Exchange. During trading, Jazeera’s Board of Directors approved plans to launch a rights issue to raise the carrier’s capital by 91%, to KWD42 million (USD146 million). The carrier plans to issue 200 million new shares worth KWD 150 fils each, including a premium of KWD 50 fils, subject to shareholders’ approval.

Also during trading, Nomura cut its rating on Jazeera’s shares from ‘Buy’ to ‘Neutral’, due to limited visibility in its financial outlook.

Elsewhere in the Middle East, Air Arabia (+2.7%) was up, after Nomura reiterated its ‘Buy’ rating for the LCC's shares. Kuwait National Airways (+2.0%) and Royal Jordanian (+1.0%) also gained. 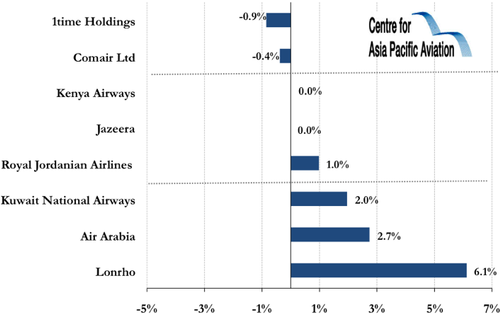