Jazeera Airways 1H2014 profit was down by one third, but outlook brightening for second half

Kuwait-based LCC Jazeera Airways reported a 34.7% decrease in net profit in 1H2014, with the tough operating environment in many of the airline's major markets, the rising price of aviation fuel and other externalities contributing to the reduction.

The carrier’s focus has been to successfully navigate the regional turbulence and deliver a strong second half of the year, particularly the busy and highly profitable summer travel period. Despite the regional unrest, Jazeera Airways has maintained its 2014 outlook, maintaining the strong run of profitability and improving value for shareholders.

Since launching its turn-around programme in 2010, the carrier has managed to record 16 profitable quarters in a row. Twelve of these have resulted in record quarterly profits.

The primary contributor to this was an aggressive restructuring and downsizing, with the carrier eliminating routes and reducing its workforce, while hiving off older A320s to Sahaab Aircraft Leasing, the Jazeera Group’s leasing unit. 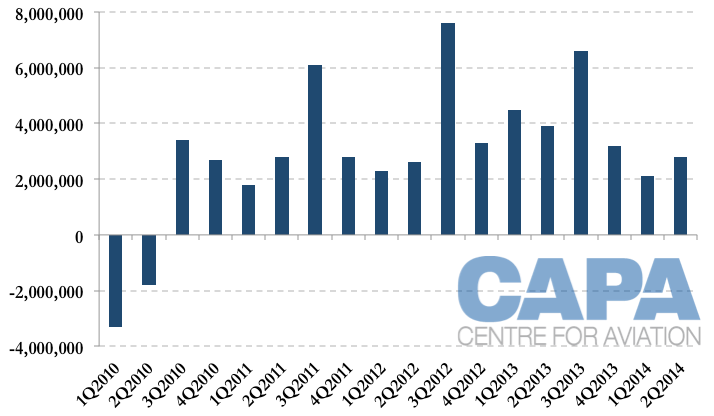 The primary cause of the decline was the unrest that has spread across several markets, including Lebanon and Iraq (notably the cancellation of Najaf flights for security reasons). 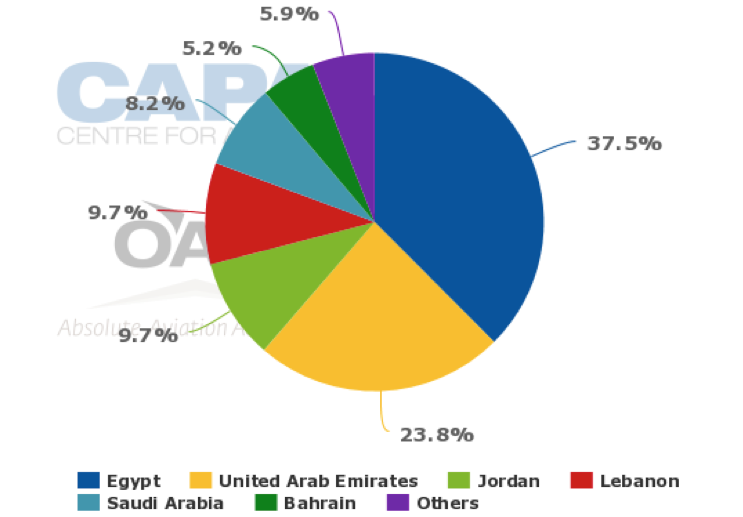 Other regional events also contributed to the passenger traffic and revenue downturn. These included the 80-day runway closure at Dubai International Airport – cutting Jazeera Airways’ capacity to the airport by almost 60% – and the total closure of Assiut Airport for its year-long runway rehabilitation. Concerns about the coronavirus (also known as Middle East Respirator Syndrome, or MERS) also reduced travel to Saudi Arabia.

Passenger traffic in 1H2014 turned down 4.8% as a result, a decline of around around 27,000 passengers for the half year. The earlier onset of Ramadan, at the beginning of Jun-2014, also contributed to the downturn. Load factors slipped slightly for the carrier, to around 67%, with Jazeera Airways noting continued overcapacity in the Kuwaiti market. Capacity management remains a priority for the carrier.

Since the 2010 turn-around was launched, Jazeera Airways has focused on growing its traffic levels via improved aircraft utilisation, higher load factors and better product/services, rather than swiftly expanding its network and fleet. The carrier’s route network has remained reasonably static, although a number of destinations have been suspended in the past few years, in response to the ongoing regional security situation. Jazeera primarily concentrates on business and leisure destinations in the Middle East and Levant, typically within a three hour flying radius.

Also contributing to the decline in revenue were lower lease rates at Sahaab Leasing, due to the remarketing of several older aircraft. These were leased out on second lease terms on longer term contracts. The Jazeera Group has opted for the long term contracts to provide cash flow stability and better visibility about revenue, partially offsetting the seasonality of the airline business.

Costs have also climbed, rising 7.5% in the first half of the year. The carrier reported a 10% increase in the cost of fuel, with fuel accounting for 35% of total costs in 1H2014, up 6 ppts.

The regional unrest also resulted in the carrier having to re-route several flight paths, increasing flying times on some routes by up to one hour in order to avoid conflict areas. The carrier is also buying more of its fuel outside of Kuwait, which also contributed to the increase.

Partially this is due to Jazeera’s pricing system and the effect of that falling passenger traffic has on the system. However, other regional LCCs have also begun introducing dedicated business class products in the past 12 to 18 months, increasing competition in the same market space. 2Q2014 yields were still up 3.4%. 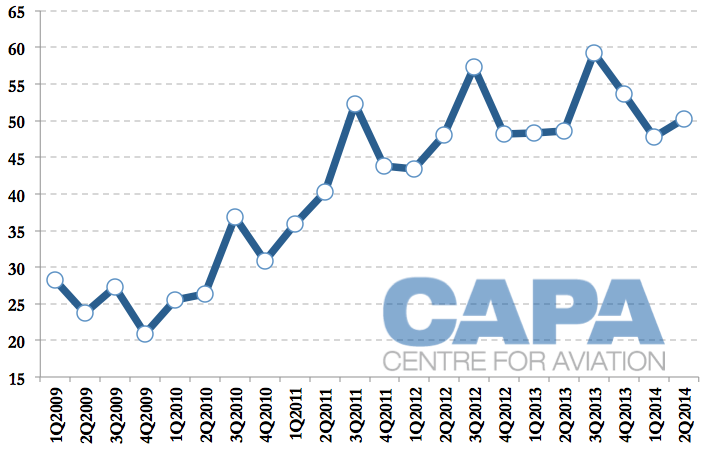 On the leasing side, Sahaab Aircraft Leasing, took delivery of three new aircraft between May-2014 and the end of the first half of the year. As a result Sahaab registered higher depreciation costs on the additional assets, up 21% year-on-year, even as the new aircraft contributed positively to overall group revenue. Sahaab leased two A320s to TAP Portugal, its first customer in Europe.

Jazeera has been making a concerted effort to reduce its overall finance costs. During Jun-2014 it announced a five-year, USD18.3 million aircraft refinancing facility through Arab Banking Corporation, which will allow the closure of an existing facility through Natixis, resulting in a reduction of the airline's debt financing charges. It also signed a three-year USD70.8 million debt facility through Kuwait's Ahli United Bank, as part of its overall strategic debt restructuring plans.

Overall, financing costs have been brought down by around 9% through the debt restructuring. The airline’s balance sheet has been progressively improved, with growing total shareholders equity, a lower debt equity ratio (of 1.7) and growth in total cash and deposits on hand. Working capital has slowly declined, but the carrier is still adequately funded and capitalised.

Jazeera Airways' run of ever-improving financial results had to come to an end at some point. The 1H2014 outcome is still a healthy profitable result and the decline was not entirely unexpected, given the external considerations and the airline’s particularly strong 1H2013 performance. However, the fall in profits and the stabilisation of yield levels indicate that many of the easy gains have been made, and another major strategic plan may be necessary.

Despite the lower profits, the carrier’s results are in line with its expectations, although its outlook is somewhat muted compared to previous years. The 1H2014 results are still the second highest first half earnings in the carrier’s history, and Group chairman Marwan Boodai remains positive the carrier will deliver stronger 2H2014 profitability. Operating and net margins at the carrier are still around 20%, a figure that would be regarded with envy by most other carriers.

There are also some bright spots on the horizon for Jazeera Airways. Expectations were for a strong Ramadan travel period, with a double-digit recovery in Egyptian traffic, particularly for the important Cairo market, returning traffic in Lebanon and strong demand for Turkey. The switch of its Istanbul route from Sabiha Gökçen to Ataturk airport also has a positive effect, allowing Jazeera to offer better timed flights at an airport closer to the centre of the city.

Re-opening of both runways at Dubai, just in time for the peak summer travel period, as well as the carrier’s new daily service to Al Maktoum International Airport at Dubai World Central, is also expected to contribute positively to both traffic and load factors.

3Q2014 and the peak summer travel period will be critical for the carrier. The quarter typically accounts for better than 40% of the airline’s annual result. Jazeera expects to see bottom line growth driven by an “exceptional” summer season with the holy month of Ramadan falling earlier in the season and the Eid Al Fitr holiday period producing strong traffic for the quarter.

Even with the regional unrest, Jazeera Airways has maintained its 2014 outlook. Performance is not expected to match the “exceptional” levels reached in 2013, but will be better than that of 2012, maintaining the strong run of profitability and improving value for shareholders.