Japan’s MLITT is reportedly planning to propose cuts to the government’s domestic jet fuel tax under the national FY2011 budget. The tax was introduced in 1972, covering fuel purchased for domestic flights only. It has been fixed since 1979, at JYP26,000 per 1,000 litres.

According to a report in Japan’s Nikkei newspaper, the tax adds as much as JPY220,000 (USD2,535) per sector on a typical Tokyo Haneda-Sapporo Chitose flight, the world’s busiest route. During FY2010, USD825 million in airline fuel tax revenues were collected by government bodies. Reductions to the fuel tax are expected to reduce receipts from airlines by better than USD115 million.

The move is part of the Japanese Government’s wider tax reforms, but is also motivated by MLITT’s efforts to relieve pressure on the domestic carriers. See related report: Japan aviation fuel tax and aero charges cuts show serious intent to reform the sector

Domestic services were slashed by the major carriers, All Nippon Airways and Japan Airlines, during 2008 and 2009. After a disastrous few years, passenger numbers are returning, but the recovery of the domestic market still lags behind international travel and neither carrier expects a quick return to profitability.

Earlier in the year, ANA doubled its full year loss forecast, and now expects a group net loss of JPY65 billion (USD719 million) for the financial year ending 31-Mar-2010. JAL, which is in bankruptcy protection, forecasts net earnings "would be very bad” due to extraordinary losses from restructuring, but actually expects an operational break even this fiscal year.

In addition, MLITT is also looking at more reductions to Japanese airport landing fees, which are up to eight times higher than at comparable international airports. Landing fees at government-run airports amounted to more than during USD945 million in FY2010.

Crude oil prices continue to edge towards USD80 per barrel, finishing the week to 20-Jul-2010 at 77.32 per barrel. US economic indicators are increasingly uncertain, a factor contributing to the stagnation of prices below the USD80 per barrel price point. After oil inventories fell earlier in the month, the US Energy Information Administration reported a 400,000 increase in the US crude oil stockpile, against analysts expectations of further falls. Gasoline and distillate stockpiles also increased beyond market expectations. 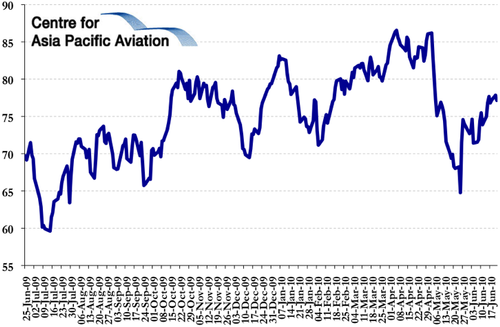 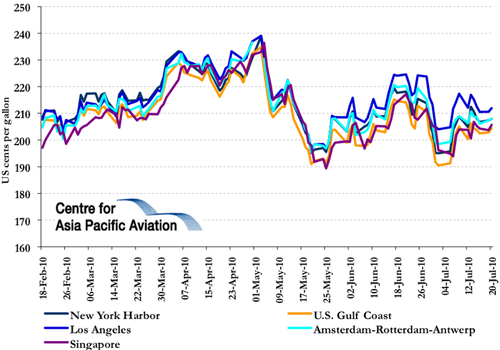 Jet fuel prices have broadly stabilised at around 210 cents per US gallon. Singapore prices rose 2.5% over the week, while other markets reported declines. The largest falls were in New York Harbour (-2.1%) and Los Angeles (-2.3%).