International load factors however gained 9.4 ppts to 75.1% in the month, as the airline continued to slash capacity, although domestic load factors were down notably (-7.0 ppts to 63.2%). Cargo volume was also down in both the international and domestic markets, by 7.7% and 6.9%, respectively.

In other news, JAL’s largest labour union has reportedly accepted a management proposal to forego year-end bonuses for 2009, according to the Nikkei Business Daily. Seven other JAL unions also expected to agree to give up year-end bonuses, meaning the struggling carrier will hold back the payouts across-the-board for the first time since its privatisation in 1987.

Qantas’ shares slipped 3.7% yesterday, ahead of an announcement today by its LCC subsidiary, Jetstar, of plans to significantly grow its domestic Australian operations between Mar-2010 and Jul-2010 by introducing an additional 700,000 new seats p/a to select destinations.

The LCC plans to introduce 77 new weekly services as it takes delivery of four new A320 aircraft, predominantly from its Melbourne and Sydney hubs to key leisure destinations, including the Gold Coast, Sunshine Coast, Cairns, Newcastle and Tasmania. 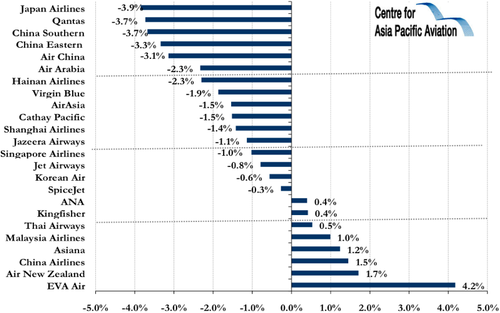