Japan Airlines (JAL) reportedly plans to file for bankruptcy on 19-Jan-2010 and embark on a government-led turnaround. JAL's stock plunged after the Monday national holiday, ending the Tuesday morning session at JPY37 - JPY30 below Friday's close. Sell orders for more than 600 million shares were left unfilled, according to a report in the Nikkei.

The state-backed Enterprise Turnaround Initiative Corp of Japan (ETIC) reportedly plans to arrange for JPY800 billion (USD8.7 billion) in capital to be made available to JAL to supports its ongoing operations, according to the Yomiuri Shimbun. ETIC's position is that JAL's capital should be reduced to zero, which has sparked the sell-off.

ETIC will reportedly decline cash offers from Delta Air Lines and American Airlines, due to concerns that giving foreign carriers an ownership stake in the company would complicate the restructuring process.

However, JAL will seek greater cooperation with a US partner airline in the future. Delta (SkyTeam alliance) is reportedly the favoured carrier for this arrangement, as it would result in projected annual benefits of JPY17.2 billion (USD187 million) - or three times the size of the expanded alliance with American Airlines - with an alliance switch reportedly planned for Apr-2011, according to reports in the Kyodo News.

Separately, American CEO, Gerard Arpey, stated JAL has not rejected its investment bid, with the two sides remaining in direct talks. He reiterated that even if JAL enters bankruptcy, American would remain willing to participate in its restructuring.

Meanwhile, Qantas has joined a oneworld alliance delegation in a final attempt to keep JAL within the alliance, with the members to hold a press conference in Tokyo today to reinforce their support for the airline, according to reports in The Age.

JAL’s shares will reportedly be delisted as the carrier files for bankruptcy protection. The Tokyo Stock Market was closed yesterday. Elsewhere, shares in JAL's oneworld partners Qantas and Cathay Pacific declined 0.7% and 0.6%, respectively. 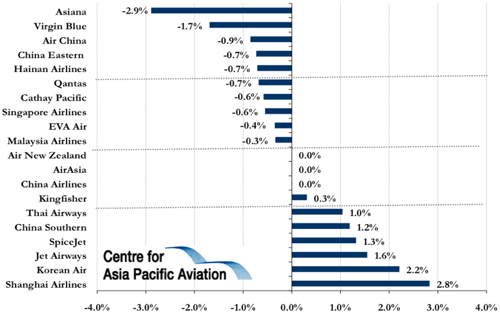