Japan Airlines' real successes may be undermined by economic fluctuations

Japan Airlines, seemingly moribund two years ago, has made a remarkable turnaround during the first half of the 2008/09 year, despite greatly elevated fuel costs. 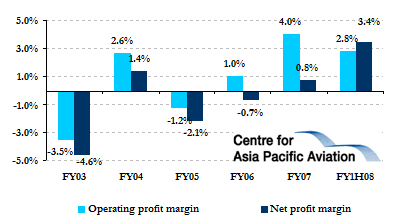 A combination of capacity reductions (including replacing less fuel efficient B747-400s with B777s), product upgrades and fuel surcharges led to a yield increase of 13.7% on international routes. Domestically the picture was not so bright, with a small yield reduction, as travel profiles reflected the slowing domestic economy.

And cargo revenues also slipped, led by a 4.2% reduction in international ATKs and a revenue tonne kilometre fall of 7.5%, most notably on US and European routes. Southeast Asian cargo demand remained "strong" during the half and increased capacity on China routes also generated increased traffic (although yields were not split out).

Looking ahead, the extremely negative impact of high fuel prices in 1H08 may well be offset by greatly changed fuel and JPY-USD exchange rates. Despite the declining economic conditions, JAL is still forecasting net income for the full year unchanged at JPY13.0 billion. But this is based on "assumptions of a USD rate of JPY106, and an average Singapore jet fuel price of USD90.00 per barrel".

If levels of the JPY (currently approximately at par to the USD) are maintained and prices continue to fall below USD80 for jet fuel, this estimate could in fact prove to be conservative. (however JAL has hedged much of its fuel needs for the year, but did not disclose details, so the assumed rate may actually be close to the mark).

But from here on the big issue becomes demand. Estimating how that will track is almost anybody's guess. In times of trouble, the hyper-cautious Japanese consumer reduces spending, especially on discretionary items such as travel.

The higher yen should in principle make it much more attractive for Japanese to travel abroad. The Japanese consumer's natural sensitivity to surrounding economic gloom may make it socially difficult to be seen to be living the high life at a time when others are suffering from the downturn - but significant discounting by wholesalers is making this an increasingly attractive option.

Against this, the stronger yen is also making Japanese exports less competitive, so some major companies are cutting international travel budgets in anticipation of large sales downturns.

Then again, if international travel is curtailed, domestic should benefit, and JAL is now much better positioned to benefit from this than it was just a couple of years ago, when it was still bedding down its JAS merger.

The airline has performed unexpectedly thorough and effective efficiency improvements over the past year and it will be a great pity if these efforts are undermined by external change. But at least it has the advantage that these improvements have been made in time.

The prospect of the former, overweight and seemingly rudderless, JAL entering a highly uncertain time like today's would not have been a good one. In fact, it would have been clearly at risk of terminal decline. But with the refreshing changes now made, JAL is much better positioned to withstand the cold winds that are beginning to sweep around north Asian markets.