JAL’s shares slumped 11.4% to JPY101 to a record low in Tokyo trading on Friday, as investors expressed concern about the future of the company.

The share price is less than half its Oct-2008 level and values the carrier at JPY276 billion (USD3.1 billion).

JAL’s share price lost a quarter of its value last week and has fallen by more than 40% since the new government took office last month and installed a five-member Task Force to form a restructuring plan. 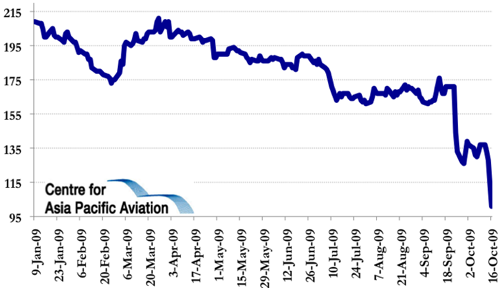 Also on Friday, Standard & Poor's downgraded the carrier by two levels into junk status (from 'B+' to 'B-') on concern it may issue new shares to pare debts. It added that a bankruptcy filing was less likely but possible.

Moody’s Investors Service also downgraded the long-term debt rating and issuer rating of Japan Airlines International by one notch, from Ba3 to a speculative grade of B1. The credit rating agency has also placed the ratings on review for further possible downgrade. The B1 rating is regarded as having speculative characteristics and high credit risks. The rating action reflects Moody’s concerns about increased uncertainty over support for JAL from its creditor banks and the government due to difficult market conditions, the change of government in Japan, the pressured state of its earnings and its limited financial flexibility;

Also in China, Air China’s shares slipped 5.4% on Friday, as parent company, China National Aviation Holding Co, announced plans to sell CNY3.5 billion (USD513 million) of one-year notes on 20-Oct-2009. The company will use 60% of the proceeds to support operations at Air China. 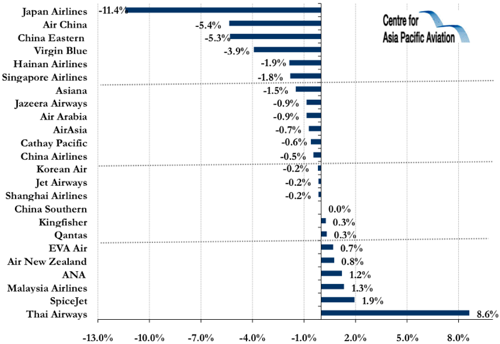 MAS expects improved loss in 3Q2009; yields remain low but on the improve

Malaysia Airlines’ shares gained 1.3% on Friday, as CEO, Tengku Azmil Zahruddin, stated the carrier expects to post an improved operating loss in 3Q2009, compared to 2Q2009 levels. He stated, "while it's difficult to comment as we have yet to release our results, past trends show that the second quarter is [traditionally] the worst. So if the trend continues, we should see better results in the third quarter than in the second quarter”.

The CEO added that the carrier’s yields appear to be improving quarter-on-quarter after falling approximately 16% year-on-year in 2Q2009, but still remain too low. The carrier plans to be profitable in 2010, through cost cutting measures and the acceleration of its Business Transformation Plan 2.

In the Middle East, Etihad CEO, James Hogan forecast the carrier would break even in 2011, rather than 2010 as previously forecast. Mr Hogan stated that although traffic has continued to grow, Business travellers have been trading down to Economy fares amid the global financial downturn, affecting yields. However, the carrier expects Business travel and the economy to recover.