Japan Airlines shares opened up 9.2% today, after remaining stable on Friday, following news that the carrier is in talks with both American Airlines and Delta Air Lines regarding a potential investment in the struggling Japanese airline.

Delta Air Lines has reportedly expressed interest in investing up to JPY50 billion (USD550 million) in JAL, giving the US carrier a stake of up to 11.2% in the Japanese airline. The agreement would also reportedly include possible investments from Delta’s European partner, Air France-KLM (with a reported investment of several billion yen).

JAL is planning to raise approximately JPY250 billion (USD2.8 billion) by Mar-2010, including JPY100 billion in loans from financial institutions, a share issuance of more than JPY100 billion and selling shares in subsidiaries and other assets to raise up to JPY60 billion (USD659 million). 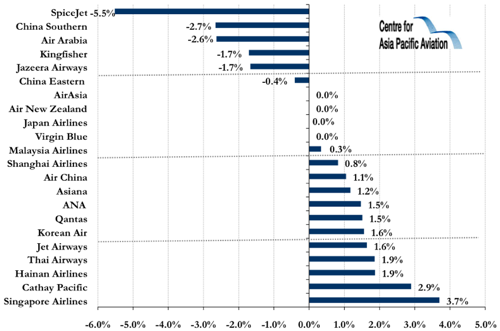 Also in North Asia, EVA Air reported continued yield weakness in Aug-2009, with passenger slumping 17.7% in the month, with cargo yield contractions even worse, down 37.4%, resulting in a 13.7% reduction in passenger revenue to USD129 million and a 38% slump in cargo revenues to USD57 million. The carrier, however, increased passenger numbers by 11.3%, and maintained a load factor of above 85% (86.5%, -3.8 ppts) in the month.

China Southern Airlines shares were down 2.7% on Friday. The carrier’s Chairman, Si Xianmin, confirmed the carrier is applying for a second round of subsidies from the Chinese Government, to help lower its debt burden.

In India, Jet Airways shares gained 1.6% on the fourth day of the carrier’s strike - which has now ended. The strike resulted in a daily loss of revenue of approximately USD2.2 million, more than 1,000 flight cancellations (affecting as many as 100,000 passengers) and a significant reduction in bookings (domestic passenger bookings dropped 39% to 14,000 per day and international bookings were down 9.5% to 9,500 per day).

Separately, the carrier stated it plans to raise fresh equity over the next two to three months, through a domestic issuance of shares by qualified institutional placement.

Thai Airways to create a strategic plan, to take out a new loan

Thai Airways' shares gained 1.9% as the carrier’s Board of Director approved a number of plans to improve Thai's business amid the global financial downturn.

The carrier will conduct a review of its business strategies and will revise its financial and corporate structure, investment plans and passenger strategies in light of current conditions. The Board also approved the carrier’s plans to take out a USD294 million loan, in order to ease liquidity pressures and ensure financial stability in 2010.