JAL shares plunged to a record low closing price of JPY87 on the Tokyo Stock Exchange yesterday, on growing investor concern that the carrier could face bankruptcy, after the carrier confirmed it had secured an emergency loan from the Development Bank of Japan to prevent a collapse.

JAL shares dropped JPY8, or 8.4% (the largest reduction in five weeks), after falling to as low as JPY85, a record intra-day low since the airline integrated operations with Japan Air System in 2002. More than 82 million shares changed hands on 24-Nov-2009, three times the daily average over the past three months.

The slump was also fuelled by news that trading house, Mitsui & Co, sold all of its 11.7 million common shares (equating to 0.43% of JAL shares) in 1HFY2010, raising speculations that other shareholders will follow suit. The company still holds 80 million preferred shares in JAL.

JAL’s share price has shed approximately 60% of its market capitalisation since the beginning of the year, with the company worth approximately JPY237.72 billion (USD2.67 billion) as of 24-Nov-2009.  The carrier’s share price has fallen 15% since 17-Nov-2009, after Transport Minister Seiji Maehara stated bankruptcy was still a possibility for the airline.

Cathay Pacific experiences one of its strongest weeks last week

Also in North Asia, Cathay Pacific Airways’ shares were down 1.8% yesterday. However, in good news for the carrier, COO, John Slosar, in an article in Hong Kong’s The Standard, stated the airline had one of its strongest weeks last week on improving cargo business, although premium traffic was still slow.

Mr Slosar added that Dec-2009 passenger bookings are “marginally ahead” of 2008 levels and that demand for cargo business is very strong with a "big backlog" in Hong Kong. This is expected to “last until mid-December but will then back off".

The carrier will consider potential investors’ membership in the global airline alliances before deciding on an agreement, according to Mr Liu, who also stated that the carrier would complete its merger transaction with Shanghai Airlines and a JPY7 billion (USD1.0 billion) share sale “by the end of 2009”.

In other news, China Eastern stated it hopes to return to profitability in 2010, after a significant reduction in losses in 2009.

Thai Airways expects demand to be affected by political escalations

In Southeast Asia, Thai Airways’ shares slumped 6.0% on Tuesday, as President, Piyasvasti Amranand, warned that if political conflicts in the country escalate as expected in late Nov-2009, demand would be affected.

Mr Amranand added the carrier has no plans to launch new services in 2010, planning to instead focus on increasing frequency on popular routes. The carrier added that it expects load factors to rise to 75% for 4Q2009, due more stable oil prices and economic recovery. 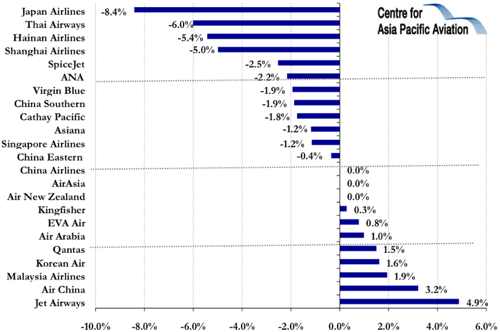