JAL trading alone accounted for nearly one third of the 3.2 billion shares traded on the Tokyo Stock Exchange's First Section.

The gains were fuelled by speculators and travellers acquiring stock to obtain discount airfares, which would likely more than offset potential losses on the investment. (JAL offers a half-price domestic flight per year to owners of 1,000 shares, and more to larger investors. Its larger shareholders - those owning more than 210,000 shares - can take more than 100 half-price trips p/a).

Meanwhile, Tokyu Corp sold its entire 2.94% stake in the carrier, booking a JPY9 billion (USD98 million) loss on the sale. A number of life insurance companies holding large numbers of JAL stock as well as institutional investors have been selling their shareholdings over the past nine months, including Nippon Life Insurance Co, Fukoku Mutual Life Insurance Co and AXA Life Insurance Co.

Thai Airways’ shares gained 1.6% yesterday, as the carrier’s President, Piyasvasti Amranand, stated the carrier expects to make a profit in FY2010, due to improved performance in the fourth quarter, with an aim of reporting a net profit of USD122 million in FY2010. Mr Amranand added Thai's outlook is on the improve as a result of the recovering economy and changes to management.

In other Thai Airways news, the carrier stated the Export Credit Agency (ECA) is currently in the process of approving a guarantee facility for USD222 million in loans for the carrier’s Airbus aircraft purchases, after the Thai Government refused to guarantee loans.

Also in Southeast Asia, Vietnam Airlines stated it expects a 30% year-on-year increase in revenues in FY2010, to USD1.8 billion, due to the economic recovery. The carrier, which reported a net profit of USD8.3 million in 2009, also expects to handle 11 million passengers for the year, an 18% year-on-year increase. 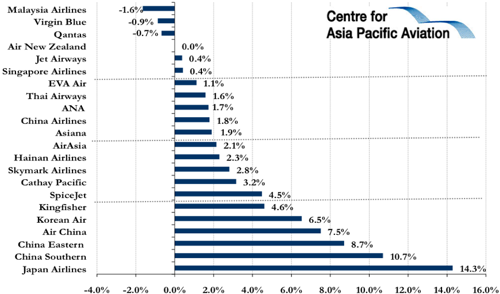