Asian airline shares were mixed on Friday (07-Aug-09). Leading the way yesterday was Jazeera Airways, which rose 9.6%, posting the largest gain on the Kuwait Stock Exchange. The LCC’s CEO, Stafan Pichler, last week stated the carrier is looking for a second hub in the Middle East to replace Dubai International Airport.

Air Arabia is also on the verge of announced another hub (its third). The airline's shares declined 1.9% on Sunday, after performing well (+1.9%) in early trading upon the release of its 2Q2009 results. The carrier reported a 10.0% increase in net profitability and a 10.5% increase in operating profit in the three-month period and stated it expects to report “positive results” for 2009, assisted by fuel hedging, lower unit costs and high load factors. However, the carrier conceded that the next three to six months would remain difficult, as there is still excess capacity in the market, diluting yields. CEO, Adel Ali, also stated that swine flu is a bigger threat for the carrier than the global economic situation and passenger traffic is suffering due to the outbreak.

Among the decliners on Friday were all the Chinese carriers: Hainan Airlines (-7.0%), Air China (-6.6%), Cathay Pacific (-5.3%), Shanghai Airlines (-4.8%), China Southern (-4.3%) and China Eastern (-2.9%), as Typhoon Morakot affects air travel in the region. The Taiwan Stock Exchange, in addition to offices and summer schools, were closed on Friday due to the typhoon.

Japan Airlines' shares were also down, by 0.6%, as it reported a massive USD1.0 billion net loss in the three months ended 30-Jun-09, and a USD884 million operating loss, a devastating turnaround from profitability in the previous corresponding period. The carrier was severely impacted by the global economic crisis and the swine flu outbreak, which hit business and leisure travel, despite fuel surcharge reductions and the strengthening of the Japanese Yen. The carrier’s yields slumped 33.7% on international operations and 2.5% for domestic services.

However, the carrier stated Sep-2009 demand is expected to be comparable or 10% more than in Sep-2008, due to a number of national holidays falling during the month, and that it has seen a “slight respite” in the decline of cargo shipments to/from China. The carrier expects business travel to remain sluggish, but has left its FY2009 outlook unchanged, as it continues to eliminate and reduce frequency on unprofitable sectors. Upon the release of its financial results, the carrier announced plans to make “drastic adjustments” to its network and fleet size in 2HFY2009, in accordance with its FY2009 management plan and to more closely match capacity to demand sooner and allow the Group to improve profitability. 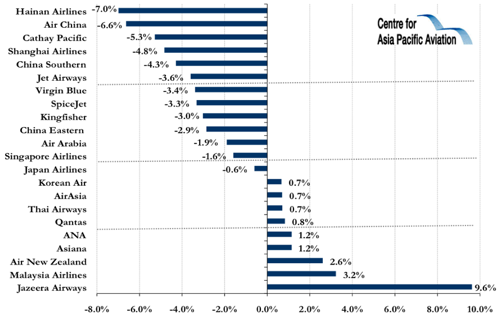