Japan Transport Minister, Seiji Maehara, is heading a new team overseeing the restructuring of the carrier, with the team to consider such issues as giving government guarantees on JAL loans and reducing the cost of pensions for JAL employees. The team may also opt to inject public money into the carrier.

Also on Friday, Moody’s lowered Japan Airlines International Company from ‘B1’ to ‘CAA1’ and put the company under review for further possible downgrade. Moody’s stated the downgrade reflects increasing concerns over leverage, pension liabilities and inefficient service network. Moody’s added that the risk of debt restructuring has increased, which would further result in ratings downgrades, depending on the level of losses incurred by lenders.

AirAsia CEO, Tony Fernandes, stated that due to “green shoots” of recovery in the economy, yields are expected to improving moving forward. Mr Fernandes added the carrier’s load factor should remain strong in 2010, after reporting a load factor of 75% for 2Q2009.

According to Mr Fernandes, “our business is great. Our passenger numbers are up even during the puasa (fasting) month. Ancillary incomes are coming up very fast and we’re getting rights to many destinations”. Ge added, “even if it [fuel prices] reaches USD100 per barrel we’re ready for it. We are okay at the moment…Fuel price is a fake price. Eventually it [price] will settle on real demand”.

Jetstar to launch service to Europe, but not in direct competition with AirAsia X: Qantas CEO

Shares in Kingfisher Airlines and Jet Airways were down by 6.3% and 4.2% on Friday (SpiceJet was up 0.4%) as Indian Oil Corp (IOC), Bharat Petroleum Corp and Hindustan Petroleum increased Indian jet fuel prices by approximately 8.7%, effective 01-Nov-09. The increase follows three consecutive fortnightly decreases. 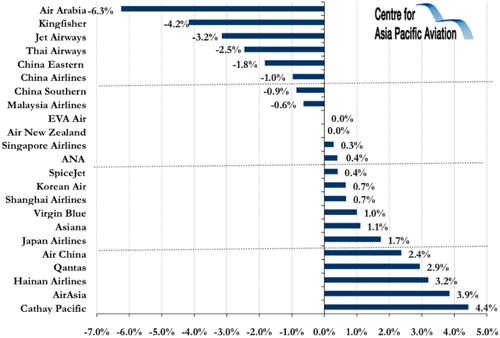