Japan Airlines (JAL) has continued the good work under President & CEO, Haruka Nishimatsu, reporting its fifth consecutive reduction in first quarter losses and a swing into the black at the operating level. JAL is finally getting down to its optimum fighting weight after years of excess. If the economy does falter, the airline could lose a few more pounds by cutting more lower yielding leisure routes. 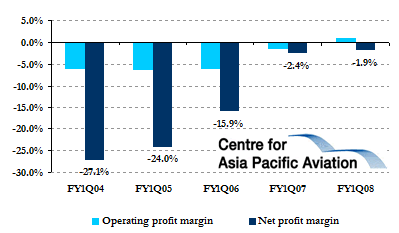 The result was achieved on the back of a further 8.1% reduction in costs in the first quarter (three months to 30-Jun-08), as JAL continued to shrink in size (including a 3.5% reduction in capacity on international routes and a 2.6% reduction domestically). Fuel costs rose just 4% in the quarter, through a combination of reduced flying operations, fuel hedging, benefits from JAL's fleet upgrade and downsizing programme and other efficiency measures.

A focus on product enhancements and targeting corporate travellers, resulted in improved yields, particularly in international markets (+11.2%), which meant JAL's revenues fell by a smaller amount (-5.8%) than costs. 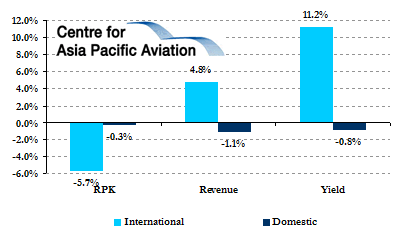 The route cuts will intensify, with a further 12 domestic and three international routes to be suspended this Winter. The capacity reductions mainly affect Osaka Kansai and include services to London, Shanghai and Busan.

And in a move most foreign carriers would envy, JAL's largest labour union has reportedly agreed to a 5% reduction in employees' base pay and allowances. The move, which covers 17,000 workers at the carrier's core Japan Airlines International unit, should save JAL an extra USD90 million annually.

The return to operating profitability in the first quarter is a good achievement for JAL and the timing is critical, as the Japanese economy continues to weaken. The slowdown, combined with high fuel prices, has already claimed one airline casualty, with cargo operator, Galaxy Airlines stating this week that it is preparing for a bankruptcy filing. ANA this week announced four routes would go and frequency would be cut on seven others.

JAL however is finally getting down to its optimum fighting weight after years of excess. If the economy does falter, the airline could lose a few more pounds by cutting more lower yielding leisure routes.