Jacksonville International Airport represents Florida's largest city, one that has a comprehensive industrial and commercial presence as well as being an attraction to tourists of all kinds.

Despite the city’s commercial status, a five million ppa throughput, and a high degree of connectivity compared with a local airport peer group, the airport's traffic growth has stalled in recent years. Most domestic flights are to hubs. It is hoped that Cuban flights might start up shortly, placing Jacksonville strategically.

This report looks at present and future growth trends at the airport, local airport statistics, how it matches up to competing airports across a range of metrics, at construction activities and airport ownership.

Jacksonville is Florida’s largest city in more ways than one

Rather than the better known cities of Miami or Orlando – as might be expected – Jacksonville is Florida’s largest city by population (870,000) and the 12th largest in the US as a whole, on account of local government consolidation placing most of its population within the city limits. The metropolitan area population is 1.35 million, and physically the city is the largest in the US at 834 square miles.

Jacksonville has been a major military and civilian deep water port since the 19th century. There are two large US Navy bases there, and the Port of Jacksonville is Florida's third largest seaport. Other key elements of the local economy include services such as banking, insurance, health care However, it does not register in the Globalisation and World Cities Research Network’s inventory of actual or aspiring global cities, in which Miami and Atlanta feature as Alpha World Cities – the third highest ranking.

Tourism is also important and particularly golf tourism. In the early 20th century the city was a major centre for the film industry owing to its warm climate, exotic locations, good rail access and cheap labour; more than 30 silent film studios were established there. However, the emergence of Hollywood put paid to that industry.

Location of Jacksonville International Airport in relation to rivals 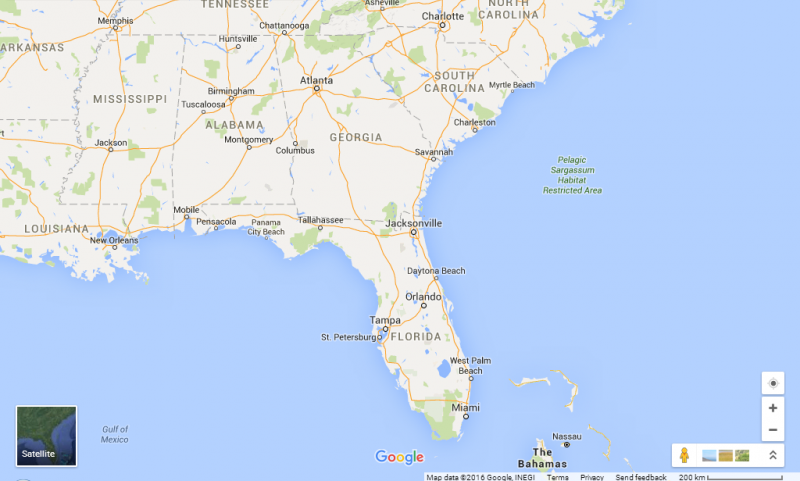 For the purposes of this report Jacksonville International Airport (JIA) is compared with neighbouring airports at Tallahassee (the state capital), Daytona Beach, Orlando International and Savannah/Hilton Head in Georgia (a small city but with a big tourist industry).

For a comparison with Miami, Fort Lauderdale, Tampa, Atlanta, and Charlotte Douglas airports:

Jacksonville is the second most significant regional airport regionally, after Orlando International

The table below compares JIA with the peer and neighbouring airports in Florida and the south eastern US using a variety of metrics that include aviation and population statistics. They are mainly O&D airports.

Note: In the first four columns a lower number means the airport is higher in the rankings. In the final column a higher score suggests a higher proportion of local passengers are using the airport. (N.B. population figures in this instance are for metropolitan areas, not cities.)

It is evident that Orlando International dominates this table, operating on a much bigger scale than the other airports. Apart from that, JIA is the most significant airport in the group by all measures.

The tables below show how JIA compares alongside a selection of neighbouring US airports, i.e. the ones compared in the previous table, in terms of airline activity and route development.

Comparison of airports by total airlines and nonstop destinations

This chart also confirms the pre-eminent role of Orlando International Airport in the region – the central and northern parts of Florida, stretching out into southern Georgia.

However, JIA is shown to be the second most important regional airport by all measures except nonstop freight destinations (Tallahassee) and pax to airline ratio, which points towards the degree of airline competition and passenger choice at the airport, as measured by the annual passenger number vs. the number of airlines.

A low reading equals greater competition/choice, but with only eight airlines for five million passengers – JIA is the second highest figure.

Jacksonville's international connectivity is to the Caribbean

The route map below shows destinations that can be reached by direct (red) or connecting (blue) flights. There are two international country destinations currently: the Bahamas and Antigua, plus Puerto Rico (a US Commonwealth territory).

Otherwise, all services are contained within mainland USA. There are no intercontinental long haul services. The airport has two runways, one of 3048m x 45m, and Customs and Border Control facilities, so expansion of international services that are in keeping with the city’s economic and tourism status should be possible if the demand is there. 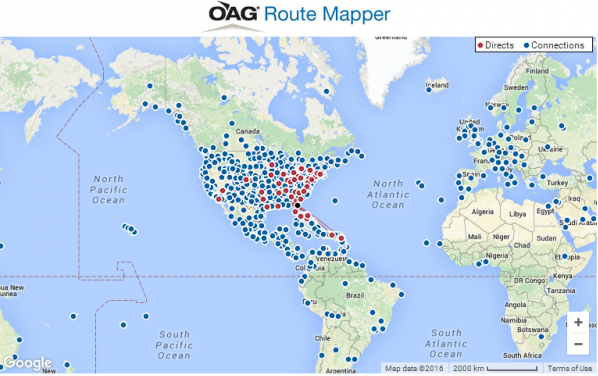 The ‘heat’ map below simplifies the information above by identifying the countries/regions with the greatest density of international seats, and they are the northern part of South America followed by Central America and Western Europe. 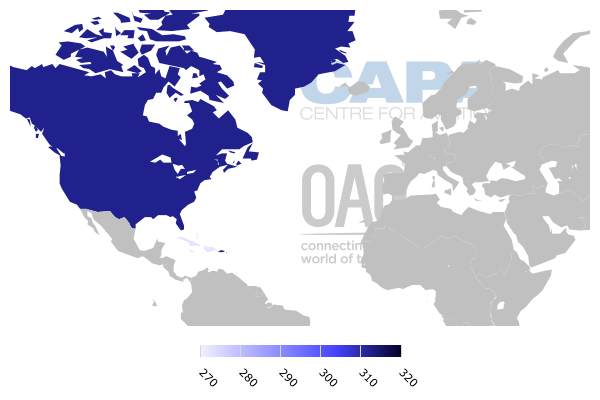 Nonstop connectivity - JIA is ahead of most rivals

The chart below adds more detail to the examination of nonstop connectivity and this time embracing all destinations rather than just international ones, and comparing JIA again with the same clutch of airports. 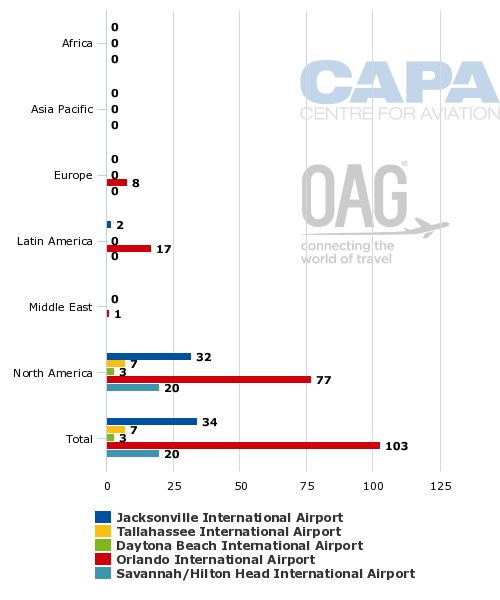 Again, one would expect Orlando International to be well ahead of all the other airports, and particularly so on international services, but a strong showing in the US plus the Latin America services ensure that JIA is ahead of other competing airports by this measure.

Landing charges are on the high side

The selected criterion here is landing charges for five different aircraft types at JIA and at other airports in Florida. In this instance the comparable airports are different because charges data is not kept on smaller airports, hence those shown are the Orlando, Tampa and Miami International airports.

The chart of landing charges at these airports, below, shows that in 2014 there was no material advantage to be gained by flying into JIA compared with its rivals.

In four of the five aircraft categories Jacksonville had the highest landing charges. There are other charging methods where a comparison may produce a different result but based solely on this evidence there are issues of cost competitiveness that could adversely influence growth, especially in the international arena. 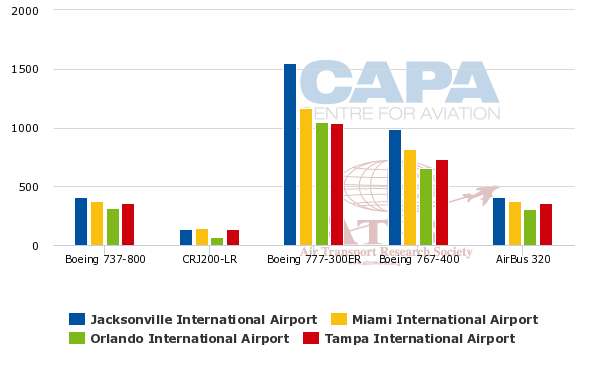 LCCs account for one third of capacity at JIA 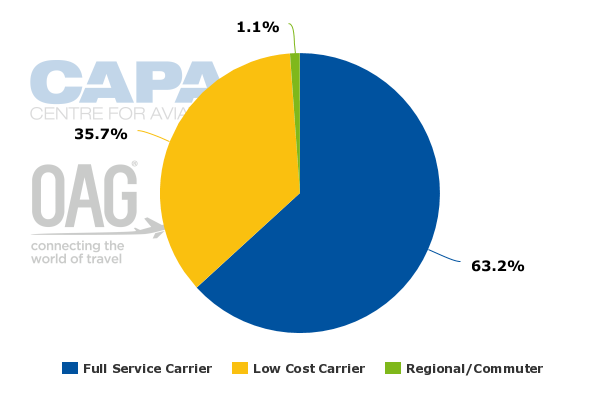 The chart below compares this traffic split with the airport’s peers.

There is no obvious trend for this collection of airports. JIA has the second highest ratio of LCCs after Orlando, but all the airports appear to cater for their own very individual markets.

The main airlines operating at JIA are shown in the seat capacity distribution chart below. The leading airline by capacity is Delta Air Lines, including Delta Connection, followed by American Airlines, including American Eagle. ULCCs are represented by Allegiant, at 7% of capacity. 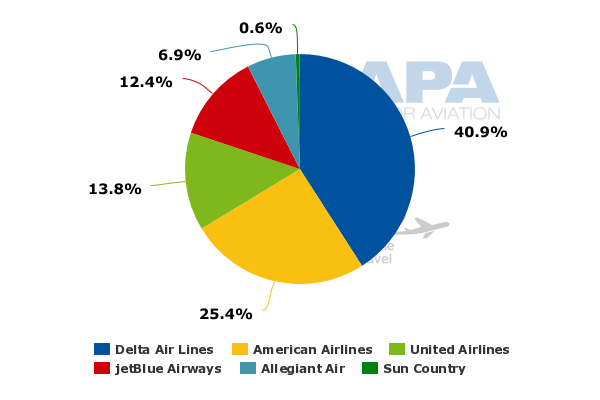 The busiest domestic routes, by passengers, are shown in the table below (year to Oct-2015). In order of popularity they were:

Source: US Dept of Transportation/Author research

While there is no great difference in the ratio of first, business, premium economy and economy seat capacity at JIA compared with the peer group, some small differences are evident. There are slightly fewer first and business class seats than at most of the peer group airports. JIA is probably best described as an ‘economy cabin-oriented’ airport although, again, the variations are marginal. 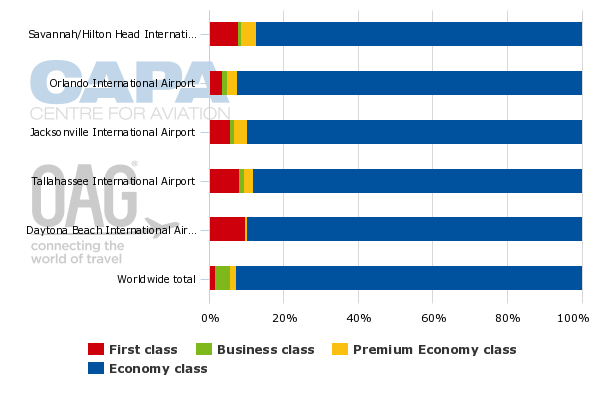 The actual figures are available online in the CAPA site but not in this representation, and for JIA they are:

Airline alliances are fairly strong at JIA, led by SkyTeam with over 28% of seat capacity, and of this figure Delta Airlines is a principal component. But over a third of capacity remains on unaligned airlines. 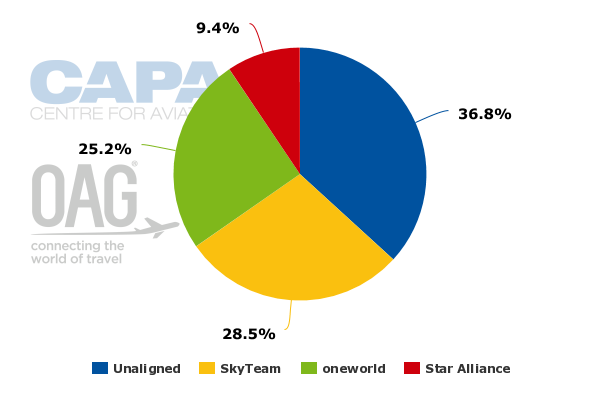 This hints at the comparative lack of a ‘business’ nature to the airport. On the other hand Orlando is a major centre for several hi-tech industries as well as being a vacation gateway, and that airport has a lower aligned airline capacity than does Jacksonville. Hence these statistics should be regarded only as trend indicators.

Comparison of JIA with selected airports by alliance penetration – seat capacity, 23-May-2016 to 29-May-2016 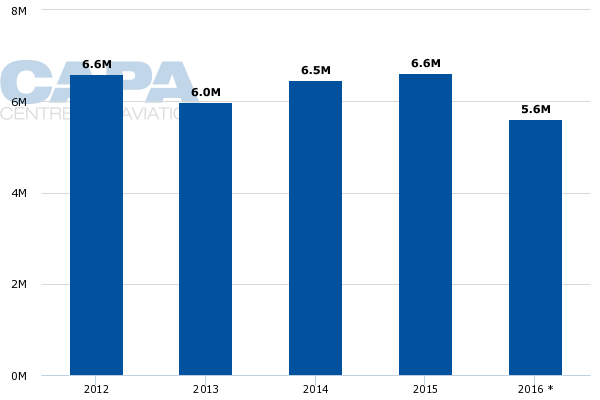 * The values for this year are at least partly predictive up to 6 months into the future and may be subject to change
Source: CAPA - Centre for Aviation and OAG 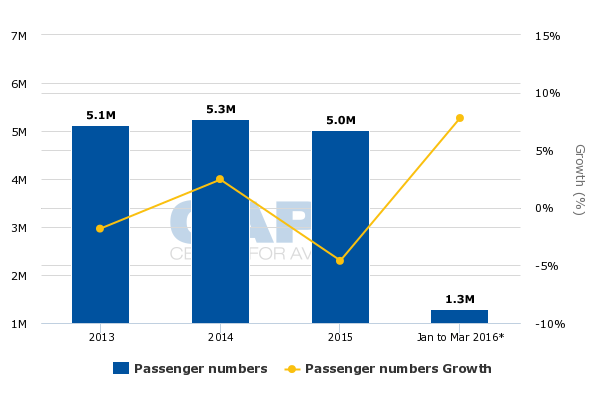 Figures from the JIA website however indicate that the tide may be turning in the airport’s favour. The average passenger growth rate in 1Q2016 was 8.2%, with +16.5% recorded in Feb-2016.

There are few cross-country flights and many of the services are into primary hub airports (principally Atlanta, also Dallas-Fort Worth, Charlotte, Chicago O’Hare, Miami, Denver etc), as well as into a smattering of secondary ones. The main exception to that rule is the ULCC Allegiant Air, which flies often to secondary-level O&D airports. 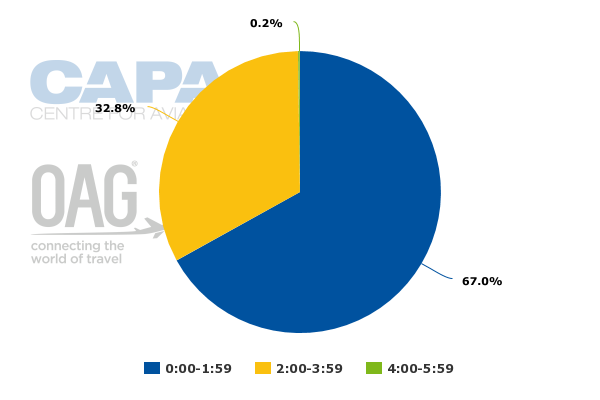 Note: the times stated are the total of the two hours preceding that time.
Source: CAPA - Centre for Aviation and OAG

The chart below also emphasises the heavy concentration of flight frequencies at JIA in the 0-2 hour flight time band. 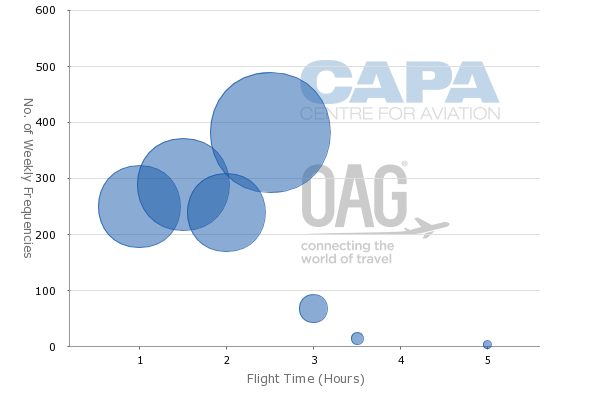 Another perspective on frequencies is represented below in the form of a bar chart of seat capacity (arriving and departing) by time of day, on a typical day, which is 26-May-2016.

There is no curfew in place at JIA but no activity takes place between 0100 and 0500. Overall there is equilibrium between departures and arrivals except for early morning – the three hours between 0500 and 0800 – and late evening between 2100 and 0000.

JIA, seats per hour, typical day, Thursday 26-May-2016 (all airlines, total system, all terminals, all origins and destinations) 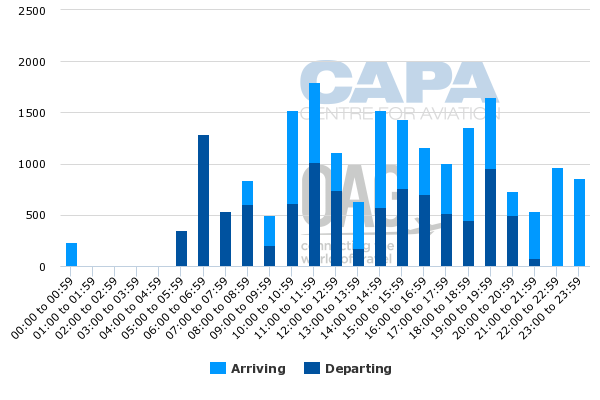 All freight at JIA is carried on passenger aircraft; there are no dedicated freighters although there are parcel carriers. All but 0.5% of cargo capacity is domestic. Capacity in 2015 amounted to 88.3 million kilos – slightly reduced on the previous year.

Delta Air Lines and American Airlines are the biggest providers, as with passenger seat capacity, but where cargo is concerned the third largest capacity supplier is jetBlue, followed by Southwest Airlines and United holding only fifth place in the ranking. 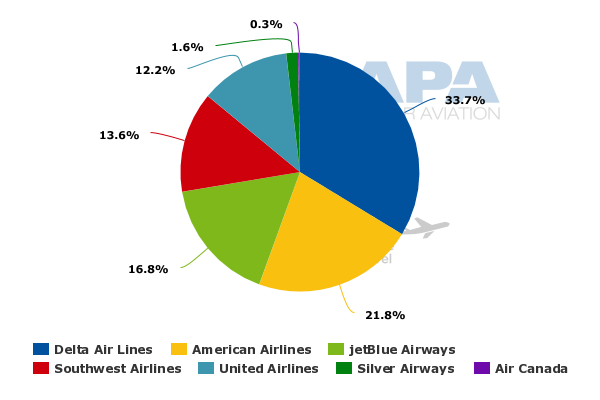 Of the international capacity, there is an even split between Canada and the Caribbean.

Modest construction is under way

The airport is a single terminal building, and it shares facilities with the military.

According to the CAPA Airport Construction database a modest amount of construction work is under way on two capital projects, estimated at USD5.2 million during the 2016 fiscal year (01-Jul-2015 through 30-Jun-2016). The first is a maintenance and warehouse facility estimated at USD2.7 million, and the second is a USD2.5 million parking plaza.

Ownership remains wholly in the public sector; no indication of change

The Jacksonville Aviation Authority (JAA), an independent government agency created by the Florida legislature, operates primarily as a landlord managing the upkeep, improvement and expansion of the airport's facilities and coordinating their use by private companies. JAA owns the runways, hangars, passenger terminal building, airport grounds and road connections to the public highway system.

While the JAA is a member of the Transportation Research Board, which evaluated airport privatisation in the FAA sponsored Airport Cooperative Research Programme, and while partial privatisation via a 25-year master concessionaire operation was investigated in 2008, there is no indication of any intention to privatise the facility at this time.