North and South American airlines stocks were mixed on Thursday (15-Oct-2009), with investors showing their concern in another increase in oil prices (+3.2%), to USD77.58.

Stocks were further dragged down by Southwest’s release of its 3Q2009 financial results. As a result, the AMEX Airline Index was down 1.2% at the end of trading. The Dow meanwhile gained 0.5%.

Standard & Poor’s Rating Services decreased its long-term rating of the carrier from 'BBB-plus' to 'BBB', noting its 1H2009 results were worse than peer results for the period. Its outlook for Southwest remains 'negative'.

TAM rises on back of improved Sep-2009 traffic

TAM (+1.4%) stocks rose on the back of improved Sep-2009 traffic results. According to the Brazilian carrier, the domestic market was strongly stimulated during the month as a result of "competitive dynamics". Traffic (RPKs) rose 8.6% year-on-year, while domestic capacity (ASMs) grew by 7.4%, resulting in a 0.8 ppts increase in load factor, to 65.4%. According to TAM, during the month, industry demand grew 29.9%, while supply increased 19.9%. The carrier’s domestic market share (RPK) was 44.1% for the period.

The competitive environment impacted TAM’s domestic yield for the quarter, declining between 5% and 10%, compared to 2Q2009. However, TAM stated that it observed a "slight tariff recovery" in the first weeks of Oct-2009, in comparison to Sep-2009.

In terms of international yields, TAM estimated a 10% to 15% increase, compared with the preceding quarter. 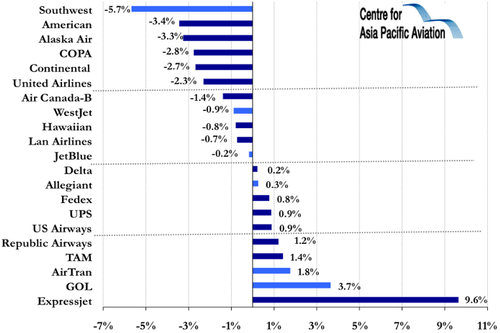