IATA stated the aviation industry is “shifting gears in the recovery cycle” with international traffic growth in Nov-2010 slowing towards normal historical levels of around 5% to 6% growth. Looking ahead, IATA noted that there is “still momentum for further expansion in passenger and freight markets – albeit in a slower phase”. Meanwhile, the supply-demand balance points to stability in passenger yields but to potential softening in cargo rates.

IATA Director General Giovanni Bisignani added: "We see a strong end to 2010 that boosted the year’s profit forecast to USD15.1 billion. Slowing traffic growth is in line with our projections for a reduced profit of USD9.1 billion in 2011. That’s a 1.5% margin. More hard work will be needed in the New Year to achieve sustainable levels of profitability."

International passenger traffic: Actual and seasonally adjusted:
May-2005 to Nov-2010 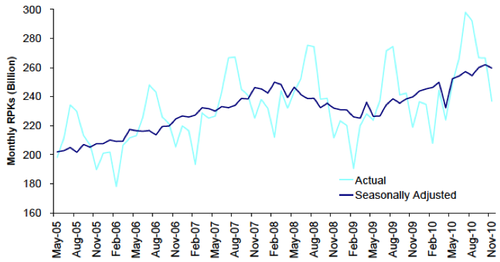 International freight traffic: Actual and seasonally adjusted: May-2005 to Nov-2010 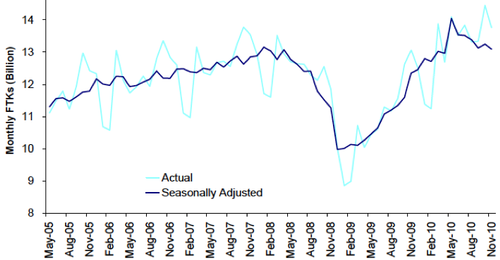 Nov-2010 traffic growth slowed from the 10% passenger traffic increase and the 14.5% freight growth reported in Oct-2010 with the slowdown partially skewed by the “rapid rise” in traffic volumes in 4Q2009. Mr Bisignani added that the relative weakness in developed markets is being offset by the momentum of economic expansion in developing markets. 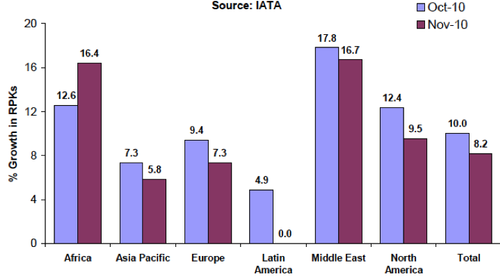 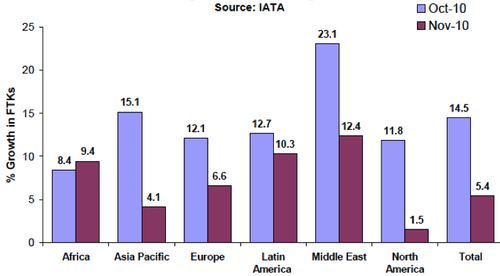 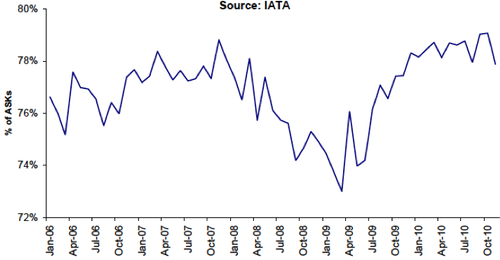 Meanwhile, traffic declined by 0.8% in Nov-2010 from Oct-2010 with all regions, except Africa, reporting a slowing in year-on-year growth rates between the months. Air freight declined by 1.1% between Oct-2010 and Nov-2010. Once again, all regions, except Africa, showed dramatic drops in year-on-year growth rates from Oct-2010 to Nov-2010.

Also during Nov-2010, air traffic growth was affected by cold weather in Europe which disrupted flights toward the end of the month with the effects likely to be evident also in Dec-2010.  Industrial action in some European countries also weighed on November growth figures.  In South America, the lingering impact of Mexicana’s failure continues to be evident. IATA stated that adjusting figures to eliminate the impact of Mexicana, the regional would have reported low double-digit growth in the month.

Variation, meanwhile, continues to be evident in the patterns of traffic growth across the regions this year. However, IATA noted that the “fundamental drivers of traffic growth still look to support further expansion in travel demand, albeit at a slower pace than seen earlier in the recovery”.

The global volume of air freight is equal to pre-recession levels of early 2008 but has declined by 7% from the peak in May-2010. Asia Pacific carriers in Nov-2010 handled as similar amount of freight compared to the pre-recession peak in 2008 while Middle Eastern carriers handled more passenger compared to this period. North American carriers’ freight volumes are 7% below pre-recession levels while European carrier’s freight volumes remain 12% below these levels. Overall, freight capacity for airlines in the three largest regions is still some 5-10% below what it was prior to the recession.