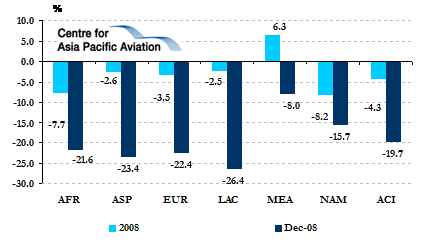 Ms Gittens stated further deterioration in the air freight sector can be expected over the next two quarters, "reflecting the constricted global trade and commerce environment in which we are operating".

An overall contraction in passenger volumes in 2009 is "inevitable" and could be as strong as -4%, according to ACI's recently revised short-term forecast. ACI's World Economics Director, Andreas Schimm, stated, "we hope to see the bottom of this accelerated downward passenger traffic trend in the first quarter of 2009 and a slow stabilisation of traffic figures during the rest of the year".

For the month of Dec-08, global passenger traffic fell by 6% year-on-year, as did international and domestic traffic. 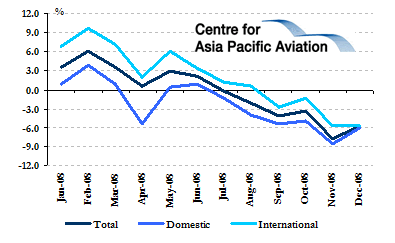 The top 10 international airports all reported declines, led by Bangkok (where traffic slumped 42%, as a result of political protests which shut Bangkok's airports in late Nov-08/early Dec-08), London Gatwick (-14%), Incheon (-13%) and Tokyo Narita (-10%).

Dubai was the only exception, registering a 5% increase (after falls in Sep-08 and Nov-08). The only region to grow in Dec-08 was the Middle East, with a 7% increase in international traffic. 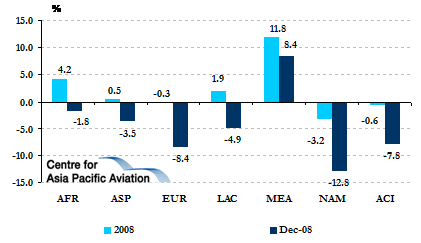 Domestic passenger traffic results were buoyed by China where the large airports showed double-digit increases, once again led by Beijing (+22%). However, the strong increase in China was offset by continued weak performance in India and the US where the large airports (Los Angeles, Chicago, Las Vegas and the New York City airports) suffered double-digit reductions. European domestic traffic (-12%) was strongly impacted by the Spanish market, with Madrid and Barcelona reporting reductions of 19 % and 24%, respectively.

Preliminary traffic results for 2008 from ACI show that for the full year, worldwide passenger traffic remained flat, thanks to strong growth in the first quarter which balanced the year-end decline. However, the freight sector, which did not benefit from any significant surge in traffic during the year, contracted by 4.5% in 2008, including a 3% drop in international freight and a 7% fall in domestic volumes.

Ms Gittens stated, "December terminated a turbulent and sobering year for the airport industry. A very promising first quarter was followed by steadily decreasing demand, resulting in a flat finish for the year. Domestic traffic in the US was particularly hard hit due to high fuel prices earlier in the year and the subsequent economic crisis, whereas international traffic performance was bolstered by good results in the Middle East, Africa and Latin America markets".

A call to keep investing in new capacity

Despite the devastating impacts of the global economic slowdown on passenger volumes and financing available for expansion projects, ACI has implored airports to "prepare for the resurgence of global markets".

Ms Gittens stated the aviation industry has experienced and survived economic cycles and crises in the past and the long term forecast for traffic growth "remains basically unchanged". She urged airports to work closely with their aviation partners and continue to invest now, "to ensure that tomorrow we are ready to serve the billions of passengers who rely on us for efficient service in an environmentally sustainable manner".