The 2Q2010 revenue was the second highest in history and just shy of 2008's 2Q2010 USD33.3 billion record. The 2Q2010 profits missed the decade high set in 2007 by only USD8 million. 2Q2010 revenue and profits were slightly higher than AirlineFinancials.com projected earlier in the month.

American (AMR) as projected was the only major airline to report a loss for the recent Q2. Based on net income margin performance ex-special items, Alaska (ALK) led the industry at 8.6%. The rest of the airlines were:

Average Q2 margin for the industry was 5.87%

AirlineFinancials.com expects continued strong performance for the airline industry through at least the current 3rd quarter. 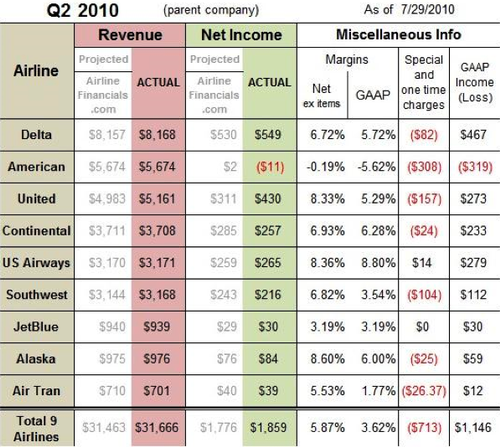 Regionals kick off their reporting season next week joined by Air Canada and Embraer. Regional results should mirror their major-partner clients. ExpressJet has not announced its second quarter conference call date nor has WestJet.

Southwest Airlines was flat for the day, despite reporting a 23.1% year-on-year rise in net profit for the three months ended 30-Jun-2010, to USD112 million, or USD0.15 per diluted share. Excluding special items for both periods, net income was USD216 million for the period, or USD0.29 per diluted share. The result beat on-average analyst expectations of a USD0.27, according to Thomson Reuters.

North and South American airline stocks rose marginally on Thursday (29-Jul-2010), thanks to a surge in Expressjet and Latin American carriers’ prices for the day. The gains were despite a second consecutive decline in the Dow (-0.3%) due to some disappointing financial results, and an increase in oil prices (+3.0%), to USD78.36. 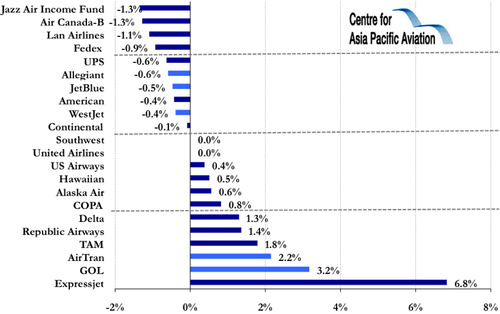