For decades, Air India was the face of Indian aviation presented to the world. It struggled against constant government interference and usually operated old equipment because gathering the requisite support and funding for new aircraft was a monumental task. The domestic market was equally restricted and restrictive and, compared to other developing nations, foreign access was limited as well.

But in a virtual eye-blink, the landscape was transformed at the start of this decade. Air India and Indian Airlines were to be revamped and freed from influence. New competitors sprang up as barriers to entry came down and the whole country appeared to be willing and ready to fly. Money was raised to fund new ventures and Boeing and Airbus saw triple-digit orders placed - see Chart 1.

Many of those aircraft are now being delivered, with the 2008/09 deliveries unfortunately coinciding with a steep reduction in demand as the global and local economy cooled. The delivery of excess aircraft over the past 12 months has certainly exacerbated the current situation

In the international market, Kingfisher ordered five A340-500s, none of which has flown, or likely will fly for the airline, while its budget unit, Kingfisher Red (the former Air Deccan) continues to cancel A320 orders with Airbus (two more were cancelled in Sep-2009). Some of Jet Airways’ B777-300 fleet is flying for Gulf Air and Turkish Airlines with its future deliveries going straight to Turkish. Finally, as of 05-Oct-2009, Air India announced that it would lease out three of its B777-200LRs. Domestically, GoAir, which has ten A320s on order, presently operates only seven of the nine aircraft it currently holds, with two already parked.

How has India once again fallen into such turmoil?

India is one of the two most populous nations on earth and has, despite the economic downturn, a growing level of prosperity, as well as being a high potential business and leisure destination for much of the globe. It has a very large diaspora.

Selected countries’ GDP per capita^ and propensity to travel* by air 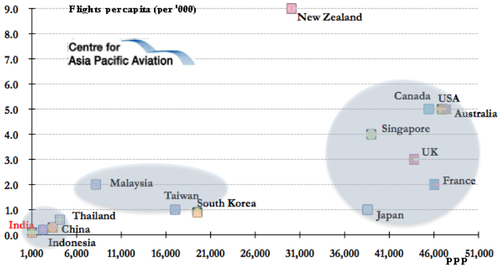 The great promise, so willingly embraced just a few years ago (most of the carriers above have start-up dates in 2004 or 2005) has turned into mind-bending deficits and caused the Chairman of Kingfisher, Vijay Mallya, to publicly state that the airlines losses are "no longer sustainable". He added, "it costs us more to fly than to stay on the ground."

All three long-haul Indian carriers had announced plans to fly to San Francisco – a region with a massive expatriate community and countless links due to the technology industry. Kingfisher was to have operated an A340-500 non-stop link between Bangalore and San Francisco.

In the end, only one carrier, Jet, actually flew to SFO and that service lasted less than a year. Additionally, the one-stop Air India service to Los Angeles has also been suspended. As it turns out, Indian carriers prevail on very few international non-stop services to the Indian Subcontinent. In chart 2, all the international points served non-stop from Delhi are listed. Of the 47 destinations, Indian carriers have dominance on only nine.

In many cases where service numbers are comparable, capacity is not. Between Delhi and Hong Kong, Cathay Pacific operates A330s, while Air India flies its ageing A310s (although Jet and Kingfisher have recently entered the Hong Kong market). To Bangkok, the Indian airlines operate B737/A319s against Cathay and Thai Airways with widebody service. So even in cases where things look even, foreign carriers often have a sizeable seat advantage.

And in Mumbai, compared to Delhi, the Indian dominance share is worse. At Mumbai, India’s primary international gateway, home carriers dominate on only five of 39 routes. And the same disparities of scale apply to many of those competing services.

Chart 4 lists a similar set of weekly statistics for the technology hub, Bangalore, where the picture is even more bleak for the Indian carriers. Almost everyone flying internationally direct to Bangalore is doing so on a foreign flag carrier.

So again the question arises, why do Indian carriers hold such a small share of their home market and why, despite some years of strong growth, are they playing a zero-sum game? Chart 5 shows that India has seen significant growth in its foreign arrivals and yet the home carriers still struggle.

There is certainly no single definitive answer but there are some contributing factors.

First, despite numerous tries and countless plans, Air India remains firmly in government control, now through the National Aviation Company of India Ltd (NACIL), formed in 2007. The government has never operated the airline efficiently and that legacy continues.

Consequently, AI has never had a coherent business plan making it unable to secure a significant portion of the international market where stronger foreign flags now dominate.

Second, given the many large population centres in India, the home carriers have a disadvantage in trying to compete. Lufthansa, for instance, flies from Frankfurt non-stop to Delhi, Mumbai, Kolkata, Hyderabad, Bangalore and Chennai, as well as from Munich to both Delhi and Mumbai. From its global network, Lufthansa can sustain such service but the reverse does not apply for the Indian carriers. Kolkata, Delhi, Frankfurt, Madrid with an Indian carrier and a partner is more complex than Kolkata, Frankfurt, Madrid online with Lufthansa. And the same challenges apply to most global destinations.

Third, this external feed is magnified by the Asian and Gulf hub carriers which serve many more cities in India. While a non-stop from San Francisco to Bangalore might have been popular, a traveler from San Francisco can currently access ten Indian cities by boarding the non-stop service to Dubai. Some have posited that the Gulf carriers are the “real” Indian flag airlines.

Finally, the new entrants that emerged in the middle of this decade had to operate and contend with a government that was not only a competitor, but also had never done a very good job of managing its own airline. To call that situation complicated is an understatement.

But there are some bright spots

The Indian domestic market is potentially enormous and will provide a vast supply of consumers for the Indian carriers. Those that survive will also have learned some valuable lessons on the need to pace expansion. We can hope that past exuberance will temper their future actions.

The infrastructure improvements still under way will benefit airlines in the future. Not only did the recent expansion exceed demand, but it also taxed airports and airways far beyond their capacity. The improvement of infrastructure, coupled with more measured growth, should be a good thing for all the players.

Finally, a recovering world economy is projected to especially benefit both India and China, improving conditions for the hard-pressed international Indian carriers.

Like all forms of development and growth, the aviation sector is full of pitfalls and setbacks. India has proven that in ways rarely seen in the past – especially in such a super-nova, boom-bust pattern. Like all other aviation markets, some brands and players may disappear, but the underlying market demand will support well-managed airlines that supply appropriate products.