Recent woes in the Indian aviation sector are providing a further boost to the international aspirations of the nation’s LCC operators. IndiGo and SpiceJet are changing the market dynamics by opening up new international routes to low-cost competition as the Ministry of Civil Aviation grants private carriers additional access to bilateral entitlements.

While incumbent network carriers, Air India and Kingfisher Airlines, have cut back their respective international networks, SpiceJet, IndiGo and Jet Airways are planning to expand as a result of being granted additional international seat allocations.

India's Ministry of Civil Aviation has granted approval to private carriers for several international routes to the Gulf and Asia after the Government earlier this year ended Air India's right of first refusal with respect to international bilateral entitlements.

According to the Ministry, IndiGo has received approval for 63 new international services per week, of which 28 are to Dubai and seven to Jeddah, in addition to services to Singapore, Bangkok and Kathmandu (28 weekly services in total). SpiceJet can now operate 49 new overseas services, including to Dubai, Riyadh, Guangzhou, Male, Bangkok, Hong Kong and Kabul. Jet Airways has been provided 56 new weekly international services, including 14 to both Kuwait and Singapore, and seven each to Dhaka, Chittagong, Dar-es-Salaam and Male. Private carriers must launch these routes by Oct-2012.

Earlier last month, IndiGo promoter Rahul Bhatia accused the Ministry of holding on to international routes. "On paper we are allowed to fly to other countries. But when we make an application the government gives the right to a selective few. We would love to fly, but the government holds on to those rights. This is reverse discrimination and its frustrating,” he said. Responding, the Ministry clarified that all traffic route requests "have been dealt with objectively in a fair manner so that every applicant airline gets its share as per its demand without prejudice". The Ministry continued: "IndiGo has been allocated traffic rights based on their requests for international routes. During this Summer 2012 alone they have been given 63 services per week which include 28 services to Dubai alone. In addition, IndiGo has also been given bilateral rights to fly to Singapore, Bangkok, Jeddah and Kathmandu. This is significant in the background of the fact that earlier their total services to international routes were only 53 per week."

The Middle East allocations are part of efforts to address the imbalance in capacity on routes between India and the Middle East, currently dominated by Gulf-based carriers Emirates, Etihad and Qatar Airways, which not only operate to the Gulf but also beyond to the US and Europe. Indian carriers hold only around a 34% share of India-Middle East capacity, and a smaller 28% share of India-Southeast Asia capacity. Overall, Emirates has an 11.5% share of total international seats from India, only slightly behind national carrier Air India (11.5%) and Jet Airways (12.8%). Air India Express has a 4.4% international capacity share, only slightly ahead of Qatar Airways, Air Arabia, Thai Airways, and Singapore Airlines. 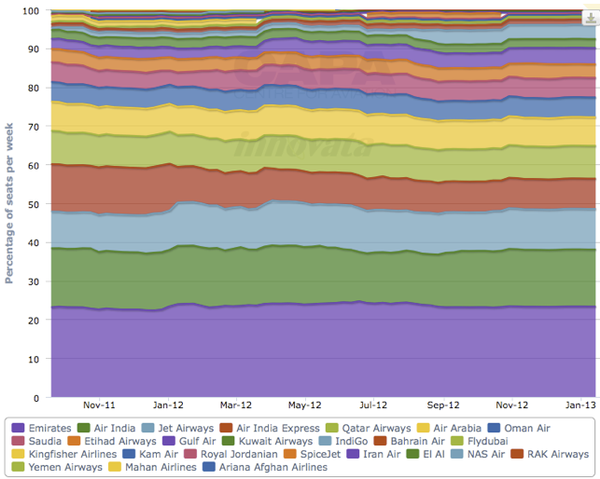 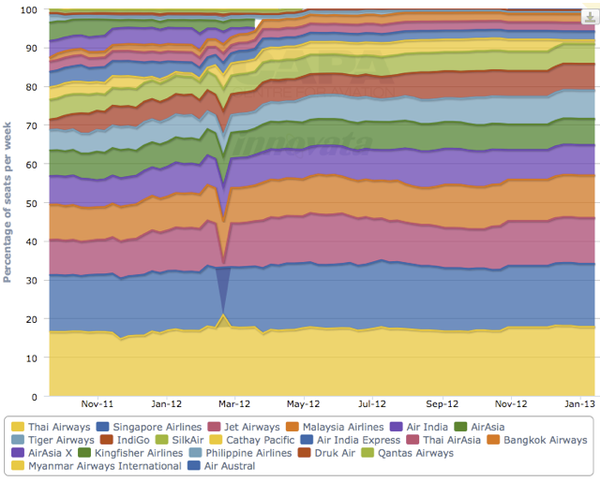 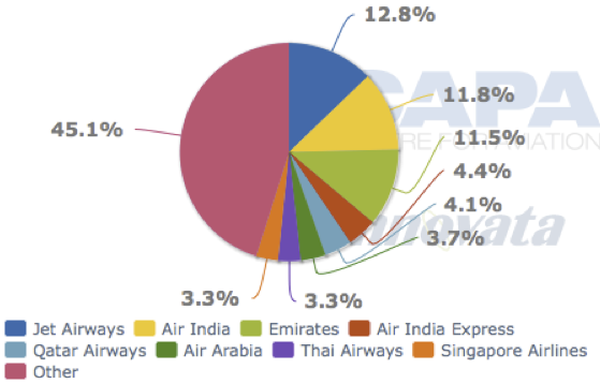 While the Indian aviation sector has been through various ups and downs since the introduction of major reforms in 2003/04, international traffic has been the steady performer, growing at a compound annual rate of 11.8% over the last eight years. Even during the economic downturn in 2008/09, when domestic traffic registered a double-digit decline, international traffic remained in positive territory, growing at over 6%.

Air India Express is the largest of the Indian LCCs in the international arena, with a network of 12 international destinations (of which 10 are in the Gulf), compared with three for SpiceJet and five for IndiGo.

SpiceJet, taking advantage of current turbulence in the Indian aviation market, is expanding its currently limited presence in the international market, with plans to launch service to six countries by the end of Oct-2012. "We will launch flights to Kabul (Afghanistan), Riyadh (Saudi Arabia), China [reportedly Guangzhou], Hong Kong, Bangkok, and Male in Maldives. The services to these countries will start by October end," CEO Neil Mills said, adding that efforts would also be made to connect to these countries from non-metro cities in India, tying in with the carrier’s other key network focus, connecting tier II and tier III cities.

The Kabul service comes amid increased bilateral ties between India and Afghanistan. Direct services between the two countries were resumed in 1Q2005, with the commencement of Delhi-Kabul and Amritsar-Kabul services. Cooperation has also included training in areas of airport management, air traffic control, navigational aids and aircraft maintenance, with India also gifting three A300s with essential spare parts to Ariana Afghan Airlines at a cost of USD13.7 million (the aircraft were handed over in Sep-2002, Dec-2002 and Mar-2003). Air India has also trained over 50 officials of Ariana Afghan Airlines.

At present, the majority of international passengers travelling to/from India do so on international carriers, with Indian carriers holding a market share of around 38%. Carriers such as Emirates, Lufthansa, British Airways, Qatar Airways and Singapore Airlines have successfully expanded in the Indian market, while in recent times Indian carriers Kingfisher and Air India have been cutting back international operations due to financial weakness and industrial action. Amid this backdrop, the nation's fast-growing LCCs, IndiGo and SpiceJet, are seeking to ramp up their currently-limited international operations, focusing initially on the Middle East and near Asian markets. With increased slot allocations by the Ministry, cheaper fares and an image which is in some cases more positive than their full service counterparts, the international aviation landscape from India will no doubt be altered in the coming years.