IATA Director General and CEO, Giovanni Bisignani, stated the Indian aviation industry is forecast to report losses of USD1.5 billion in 2009 (or 42% of total losses in the Asia Pacific region), adding that “logically most of these losses will come from Air India”.

Separately, Boeing India President, Dinesh A Keskar, stated he expects growth will return to the Indian aviation industry over the next six months, adding, “this possibility of growth will be lead by three key drivers, which are, correction in the situation of aircraft overcapacity, reduction in fuel prices and upturn in the economy. Further the up coming tourism season will also help the industry”. The manufacturer is scheduled to deliver 90 aircraft to Indian carriers over the next four years.

India’s Directorate General of Civil Aviation reports the number of aircraft acquired by India’s aviation industry fell 20% year-on-year to 132 aircraft for the nine months to Sep-2009. During the period, 45 aircraft were de-registered by the regulator, as airlines returned aircraft to lessors.

Japan Airlines’ shares slipped 6.6% on Friday, after Citigroup halved the carrier’s price to JPY80 and rated the stock "sell/high risk."

Citigroup added, "it is not certain whether JAL will go through a private reorganisation or file for bankruptcy, but even if it stays clear of bankruptcy, we think value for existing shareholders will be substantially reduced on dilution accompanying a big capital increase”.

70% of ANA and JAL domestic services operating at a loss

ANA’s shares were also weaker on Friday, slipping 1.6%. Local Japanese media reported that JAL and ANA are reportedly operating more than 70% of domestic routes at a loss, with average load factors under 60% between Apr-2009 and Aug-2009. 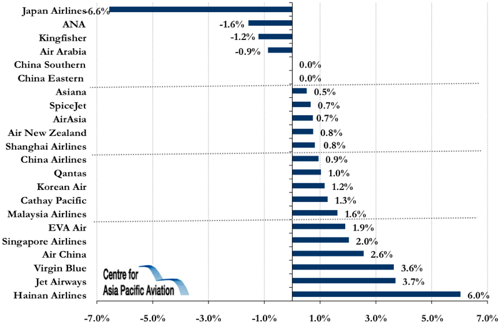