Incheon Airport getting back on track

After languishing in negative territory for over a year, Incheon Airport, gateway to South Korea, is showing signs of producing some positive growth figures soon. Total passenger numbers and cargo tonnage were down 1.9% and 4.9%, respectively in Jul-2009 to 2.6 million and 238,270 tonnes. However, falls are compounding, as Jul-2008 passenger and cargo traffic was down 5.7% and 2%, respectively. Getting back to pre-crisis levels will take longer, though new entrant airline activity provides some cause for optimism. 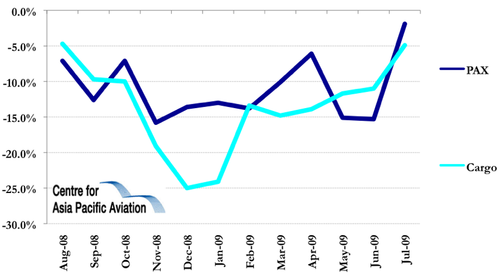 Markets within North Asia, particularly Japan (which is a key source market for Korea), remain deeply depressed amid the economic downturn, though the swine flu scare is showing some signs of abating.

Incheon’s traffic recovery is likely to be led by Korean carriers, particularly new entrants that are expanding into short-haul international markets.

Asiana Airlines added frequencies to China and the Philippines last month, while Jeju Air added Bangkok to its network. This month will see Korean Air add three weekly frequencies to Toronto (for a total of daily service from 14-Aug-2009), following the signing of an open skies agreement between Canada and South Korea. From Oct-2009, Korean Air’s LCC offshoot, Jin Air, commences its short-haul international expansion, adding services to Chongqing and Weihai in Mainland China, Macau, Bangkok and Japan.