IATA, in its Airlines Financial Health Monitor for Dec-2009/Jan-2010, commented that airline share prices worldwide gained 5% in Jan-2010, as financial markets became “more positive about airline performance” and increasingly confident about airline profitability. This followed share price underperformance throughout 2009, despite the 25% rise in the Bloomberg global airlines index. 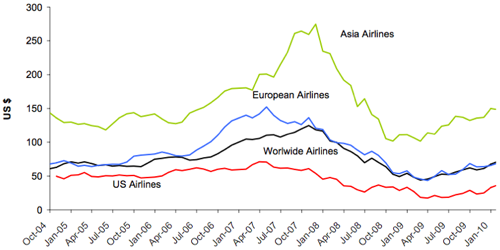 USD1 billion of cash raised by Asian and US airlines in the past month: IATA

In the past month another USD1 billion of cash was raised by airlines in Asia and the US (including a small amount of equity in the Tiger Airways IPO), according to IATA, taking the total cash raised on the markets since early 2009 to over USD31 billion.

Meanwhile, Garuda Indonesia CEO, Emirsyah Satar, confirmed the carrier will launch its IPO on the Jakarta Stock Exchange at either the end of 2Q2010 or early 3Q2010, following the selection of underwriters in two weeks. The carrier plans to raise approximately USD300 million from the offering to fund its long-term expansion plans, which involves the delivery of 24 new aircraft in 2010 (the carrier plans to expand its fleet from the current 67 to 116 aircraft by 2014). Mr Satar added that the carrier changed its order for ten B787s into B777-300ER aircraft due to the delays in production.

Also yesterday, Thai Airways (shares up 3.8%) reportedly stated it plans to raise up to USD750 million through its rights issue, which is part of its restructuring plan. Thai Government is currently considering the capital-raising plan.

Singapore Airlines VP for Public Affairs, Nicholas Ionides, added that the carrier believes Premium demand is returning, particularly in Business class, with demand expected to continue to grow in the long. Mr Ionides, in a CNBC interview, commented, "last year we were asked almost every single day why don't we rip out business class seats and put more economy class seats in because business travelers are trading down to economy. We have to take a long-term focus and we are seeing business traffic demand, in particular, pick up. So it's looking good”.

Also in the region, Hainan Airlines’ shares gained 5.5% yesterday, with Tiger Airways and Korean Air also gained, both by 4.1%. 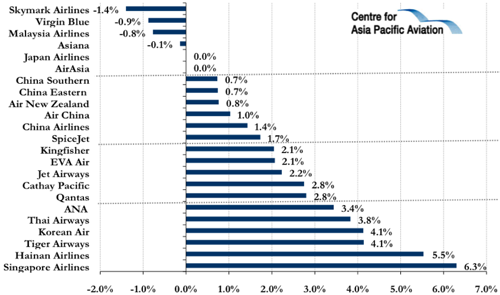