Impressive PRASM improvement for Southwest, not so for JetBlue. Strong growth for easyJet

Southwest Airlines (shares down 3.8% yesterday) stated passenger revenue per ASM for Jan-2010 is estimated to have surged 14-15% in the month - it largest PRASM increase by far in the past 12 months. The increase built on growth of 6.0% in Jan-2009.

Southwest handled 6.5 million revenue passengers in the month, an 8.6% year-on-year increase, while capacity (ASMs) fell 6.7%. Traffic (RPMs) was up 7.1% in the month, resulting in a very pleasing 9.3 ppt load factor improvement to 72.1%.

JetBlue, meanwhile, stated its preliminary passenger revenue per ASM for Jan-2010 decreased 2% year-on-year. The carrier handled 1.8 million passengers in the month (+5.9%), while the carrier increased capacity (ASMs) by 8.9%, resulting in a 0.1 ppt load factor improvement to 74.1%.

Southwest has been the star performer in improving its unit revenues in recent months. (Subscribe to America Airline Daily for detailed summaries of all major US airline traffic reports).

Across the Atlantic, Europe’s second largest LCC, easyJet reported very strong traffic results for Jan-2010, with a 10.7% jump in passenger numbers to 3.1 million, and a 3.6 ppt load factor improvement to 79.3%.

RBS Transport UK has upgraded easyJet to ‘buy’, with its price target raised from GBP4.00 to GBP4.60. easyJet has seen a 13% increase in its share price in the last three months, compared to +21% at Ryanair and +15% for European airlines on average. 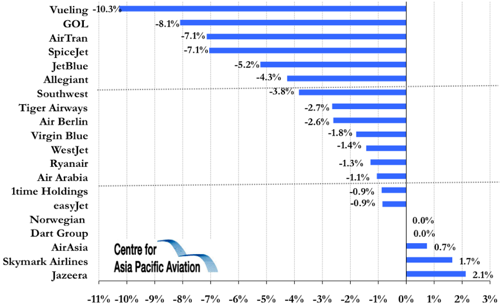