Second-tier aircraft lessors are rapidly closing the gap between the established two lessors, ILFC and GECAS. Macquarie Group announced a USD1,987 million acquisition of 53 aircraft from ILFC yesterday, mostly for the popular A320/B737 narrowbodies (more than 70% of the portfolio), with on-order widebodies making up the remainder. ILFC stated the entire portfolio has a book value of USD2,316 million.

Macquarie Group will transfer the purchase rights on six of the 53 aircraft to Macquarie Aircraft Finance, a global aircraft leasing company of which Macquarie owns 37.5%.

For ILFC, the sale is part of a reorganisation as it struggles with its debt load. The company stated in 2009 that it wanted to sell up to USD3.5 billion in aircraft to offset debt.

Parent of ILFC, AIG, recently abandoned plans to sell the unit early, following the departure of several key senior managers, including founder and CEO, Steven Udvar-Hazy, and his replacement, John Plueger. Mr Udvar-Hazy had been attempting to purchase an aircraft portfolio from ILFC since 2008. But where Udvar-Hazy failed, Macquarie has succeeded.

AIG has promised to support ILFC through to Feb-2011, announcing a new secured-term loan of up to USD750 million, backed by its aircraft inventory, in late Feb-2010. However, AIG’s long-term willingness to extend support to the company has been questioned. ILFC reportedly has debt commitments of more than USD30 billion, while AIG has been selling assets to repay the USD182.3 billion government bail-out it received.

AerCap, which completed its merger agreement with Genesis Lease on 25-Mar-2010, released an update on its aircraft portfolio. The portfolio consists of 338 aircraft and 88 engines, including 54 aircraft that AerCap added through the merger with Genesis Lease in March 2010. These aircraft are still managed by GECAS and the respective transactions have not yet been included in AerCap’s activity report.

In the first three months of the year, 22 aircraft were acquired. Two new A319s, eight A320s, one A321 and three A330s were delivered under commitments to Airbus. In addition, AerCap acquired four used A320s and two used B737s. The company also acquired five engines. 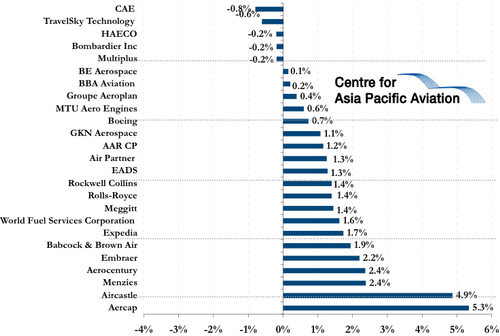