The International Energy Agency has again marginally increases its 2010 forecast for global oil consumption, with demand from emerging economies, particularly a resurgent China, responsible for much of the increase.

But consumption in the world's largest oil market, the US, is expected to remain flat in 2010, at approximately 18.8 million barrels per day. There is continued concern that if economic regulators in developed nations tighten fiscal and monetary policy, and governments reign in stimulus spending, the tentative economic recovery could stall.

The IEA has warned that its consumption forecast could slip by up to 400,000 barrels per day if economic activity is not as strong as expected. The agency bases its outlook on the economic forecasting of the International Monetary Fund, which recently revised its worldwide economic growth outlook from 2.8% to 3.8% for 2010.

Other oil forecasts have been less bullish than the IEA’s recent update. OPEC expects 2010 demand of 85.1 million barrels, while the US Energy Information Administration forecasts demand would rise, but its estimates are still lower than the IEA’s outlook.

US airlines account for approximately 35% of worldwide airline jet fuel consumption. They spent USD32.3 billion on fuel in 2009, paying an average price of USD189.7 cents per barrel, according to the US Air Transport Association fuel cost data for 2009.

The fuel bill for US carriers is 45% lower than 2008, helped by the fact that carriers cut their fuel consumption by 9.8% due to lower demand and reduced capacity, as well as the 38% lower average price per gallon over the year. However, in Dec-2009, the average price of jet fuel per gallon was 3.2% higher than in Dec-2008 - the first time in 2009 that the average monthly price of jet fuel topped levels in 2008.

…but fuel still the major cost for airlines

Based on a sample of 45 carriers, the industry body estimates that fuel represented 32.3% of total operating costs in 2008, up from 27.4% in 2007. Crude oil prices were lower in 2009 than the previous year by more than a third, pushing fuel's contribution as a proportion of total operating costs back below 30% and cutting the industry fuel bill by USD58 billion last year.

Fuel as a percentage of airline costs doubled between the beginning and the end of the decade, rising from around 14% of total costs in 2001. Fuel topped labour as the major operating cost in 2005, when oil averaged USD54.5 per barrel and airlines spent USD91 billion on fuel. 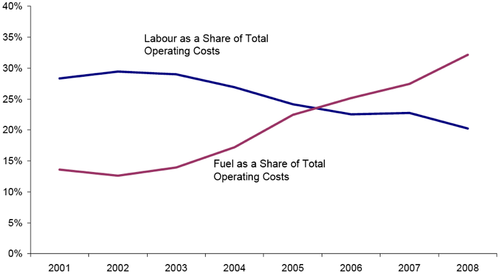 LCCs suffer more from higher fuel costs than their full service counterparts. Airbus estimates that fuel accounts for up to 60% of operating costs for LCCs in the Asia Pacific region, compared to 40% for full service airlines in the same region.

Oil lingers below USD80 per barrel 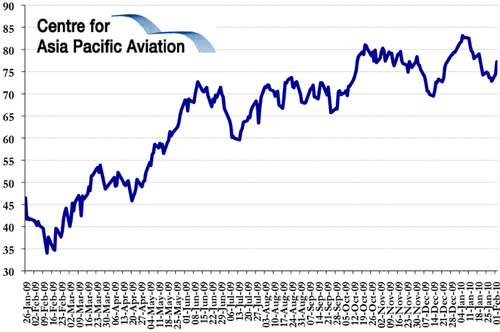 Jet fuel prices (cents per gallon) have generally returned to above the USD 200 cents per barrel mark, with New York Harbour, US Gulf Coast and Los Angeles prices up 2.6%, 2.7% and 28% respectively. Amsterdam prices finished higher as well, up 4.2%.

Singapore prices remain just below USD200 cents, but are rising fast, jumping 6.7% during the week. 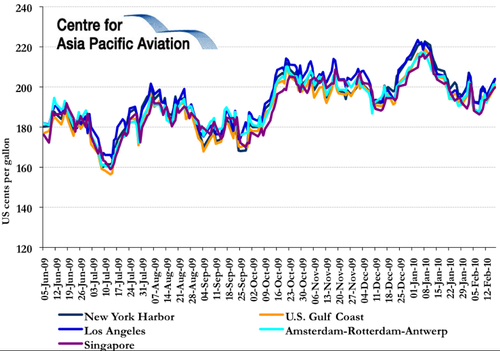