A week of European traffic chaos caused oil prices to drop sharply late last week, although prices have largely recovered as European authorities sort out their airspace problems. Oil prices dropped from above USD85, touching below USD81 per barrel in trading on Monday.

The full effect of the volcanic dust storm on airlines and the travel industry has yet to be determined, but IATA estimates that the crisis has cost airlines at least USD1.7 billion in lost revenue and additional costs as airlines care for stranded passengers.

More than 100,000 flights in and to/from Europe were grounded over a six-day period, with traffic expected to return to almost normal operations today (23-Apr-2010). IATA estimates that grounding aircraft halted USD110 million in other expenditures for airlines, much of that in unburnt fuel. Some estimates put the reduction in consumption at up to 1 million barrels per day, or 1-1.3% of global demand.

Aviation fuel supplies in Europe are exceeding the capacity of airports and operators to store them. Lufthansa was forced to cancel several contracts temporarily, even as Lufthansa Cargo quietly increased its fuel surcharges, while Frankfurt airport cancelled supplies from its link to BP’s Rotterdam plant. European jet fuel stockpiles are expected to have swelled by as much as five million barrels.

For the week to 20-Apr-2010, oil settled at USD82.98 per barrel, just 1% lower than the previous week. Flat US economic indicators and swelling US crude oil supplies have also help keep prices down from the USD85 per barrel mark they have been hovering at over the past few weeks. 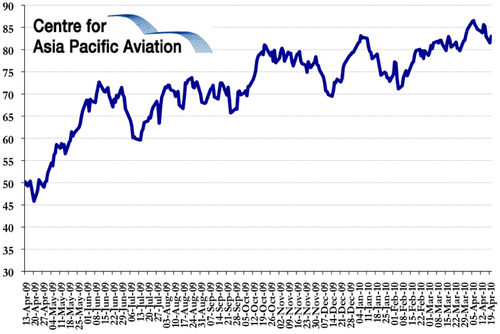 Jet fuel prices (cents per gallon) were generally lower although, as the Asia Pacific was among the areas least affected by the crisis, Singapore prices dipped the least, down just 0.7%. Amsterdam and US Gulf Coast prices each fell 1.8%. 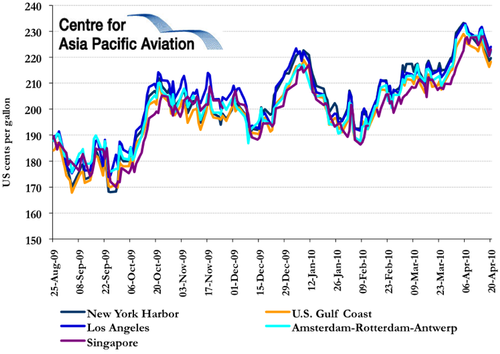