European shares were mixed on Wednesday and are expected to drop sharply on Thursday, mirroring notable falls in Asian equities after manufacturing data from China showed recent rapid economic growth was slowing, heightening nervousness about the global economic recovery.

Denmark’s Cimber Sterling witnessed the largest share price losses yesterday (-4.9%), with Norwegian's shares also weaker (-1.9%). Also in the Nordic region, Iceland Express announced plans to cancel some services from Winnipeg to Reykjavik and London due to a lack of demand. The carrier recently commenced direct services to Europe from Winnipeg but plans to return to the Winnipeg market in spring 2011.

Outside of Scandinavia, shares in easyJet and Ryanair both gained 0.1%, while shares in Air Berlin, Vueling and Dart Group strengthened, by 0.5%, 1.1% and 1.6%, respectively.

Meanwhile, Pegasus Havayollari Chairman, Ali Sabanci, stated the Turkish LCC plans to conduct an IPO of up to 25-30% of the company in 2010. However, he added the IPO could be postponed to 2011 if market conditions were not favourable. The LCC also confirmed it purchased a 5% stake in Air Lease Corporation in Jun-2010. 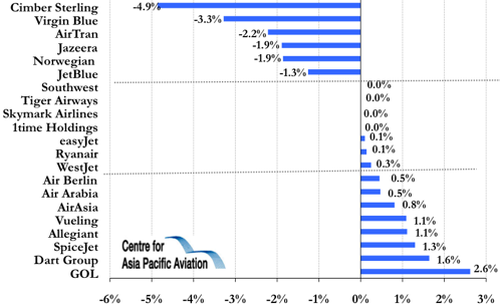