The International Civil Aviation Organization (ICAO) reports scheduled passenger traffic on airlines of member states declined by 3.1% year-on-year in 2009, according to preliminary estimates. This represents the largest annual decline on record for the industry and “reflects the 1% drop in the world gross domestic product for the year, the first negative growth of the global economy since the great depression of 1929”. ICAO failed to predict the severity of the decline in traffic this year, predicting positive growth of 0.9% for 2009 this time last year.

The fall was even greater than in 2001 when passenger traffic fell by 2.9%, “due in part to the terrorist attacks of September 11”, according to ICAO.

In 2009, international traffic fell by about 3.9%, while domestic traffic fell by 1.8%. Total (international and domestic) traffic declined in all regions, except for the Middle East, where carriers posted a strong 10% growth. Overall capacity (ASK) levels declined by 3.1%, in response to the falling traffic.

The double-digit domestic passenger traffic growth in the emerging markets of Asia and Latin America, and the relative strong performance of Low Cost Carriers (LCCs) in North America, Europe and Asia Pacific, helped curtail the severity of the decline in total traffic, according to ICAO. 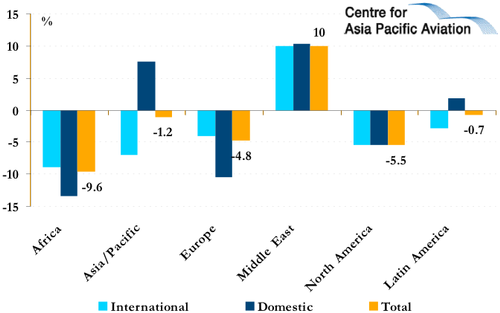 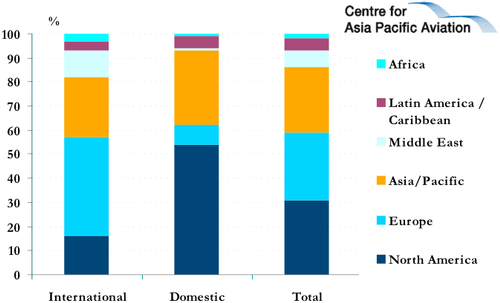 In line with the improving economic situation in many parts of the world, a “moderate recovery” is expected for 2010 with a 3.3% traffic growth forecast. The momentum is expected to continue in 2011, “on the way to full recovery and traditional growth trends of 5.5% per year”.

The 3.3% growth forecast for 2010 is however well below the 5.1% increase seen by the body 12 months ago. The slower recovery reflects the unexpectedly steep decline in traffic this year and the longer time frame required to return to the long-term trend.