Iberia's shares slumped 5.5% yesterday, as the carrier announced plans to more than double its planned capacity cutbacks this year to 4%. Iberia Chairman, Fernando Conte, stated, "with the situation that we are seeing, we believe it is appropriate to rapidly cut supply".

The carrier last Friday reported a 46% fall in EBITDAR to EUR500 million and a EUR19 million net loss in the fourth quarter of 2008, as demand eased.

Iberia is expecting March could be a "decisive month" in its merger talks with British Airways. Shares in British Airways fell 3.2% yesterday, outperforming the 5.3% plunge in the FTSE 100 index.

Another Spanish airline, Vueling, suffered a 10.4% drop in its share price yesterday, despite the commencement of a ticket cross-selling deal with merger partner, Clickair. Iberia will hold a 45% stake in the "new Vueling", once the deal is consummated later in the year. 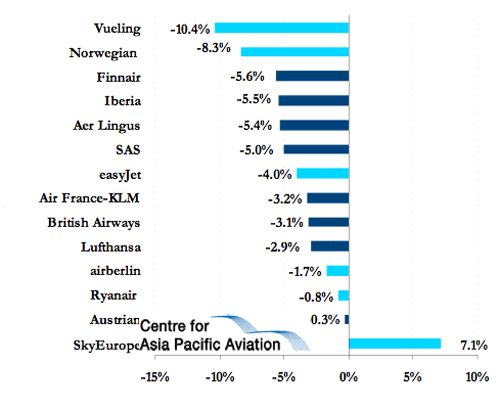