However, the Bank for International Settlements stated the European sovereign debt crisis could be a repeat of the US sub-prime mortgage debt crisis, stating market volatility over the past three months had been caused by a global loss of investor confidence.

The improved loads were the result of a 4.8 ppt increase in passenger traffic (RPKs), on a 0.3% increase in capacity (ASKs) for the month. The carrier stated unit revenue per ASK continues making progress in all the sectors, with very significant increases in international flights.

See related CAPA Profiles on Traffic and Capacity and Yields.

Aer Lingus (+1.8%) was also up. The carrier announced during trading changes to its Shannon trans-Atlantic schedule for early 2011, following a detailed review of route profitability. The carrier plans to temporarily suspend Shannon-New York and Shannon-Boston services from 05-Jan-2011 to 27-Mar-2011. The carrier will continue operating the services for the remaining nine months of the year. Both routes have incurred significant losses for Aer Lingus during the winter months in 14 of the past 15 years.

Since 1995, Aer Lingus has lost a total of EUR163 million on its trans-Atlantic flights from Shannon during winter with an average operating loss per winter season of almost EUR11 million.

Elsewhere, Cimber Sterling (-2.0%) and Norwegian Air Shuttle (-1.9%) fell. Norwegian, along with SAS (+2.2%), are expected to cancel all Swedish domestic and some international services on 16-Jun-2010 due to a strike by Swedish Airline Pilots Association members. 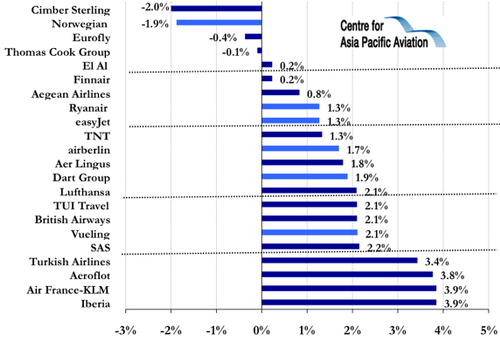