IATA data and why to expect its next profit forecast will be a downwards revision: a CAPA guide

The International Air Transport Association’s publication of its December Premium Traffic Monitor completes its cycle of reporting for 2012. In this analysis, we review the full range of IATA’s regular data and statistics to summarise the current state of the global airline industry. We also provide IATA’s timetable of forthcoming updates.

Total passenger traffic has recovered well from the global financial crisis and has seen two years of growth close to long term trend rates, although IATA sees this slowing in 2013. Premium traffic has seen its share of total passenger numbers fall from 9.5% in 2007 to 8% by the end of 2012. Cargo traffic has seen two years of negative growth and is below pre-crisis levels, but is forecast to return to modest positive growth in 2013. Passenger yields are forecast to flatten off after three years of growth reflecting modest capacity expansion, while cargo yields are forecast to fall once again.

IATA expects airline industry net profit to increase from an estimated USD6.7 billion in 2012 to USD8.4 billion in 2013. This cautious optimism is supported by its latest quarterly survey of airline business confidence, but its forecast might need to be revised downwards if recent jet fuel price increases hold through the year.

In 2012, the world’s airlines saw passenger traffic, measured by RPKs, grow by 5.3%, with international traffic up 6.0% and domestic traffic a little slower at 4.0%. As we illustrated in our report ‘Airline capacity discipline: a new global religion delivers better margins – but for how long?’ (8-Feb-2013), global RPK growth has averaged 6.0% over the past four decades. Although it was a little slower than the 5.9% seen in 2011, passenger traffic growth in 2012 was again somewhere around its long term trend rate. 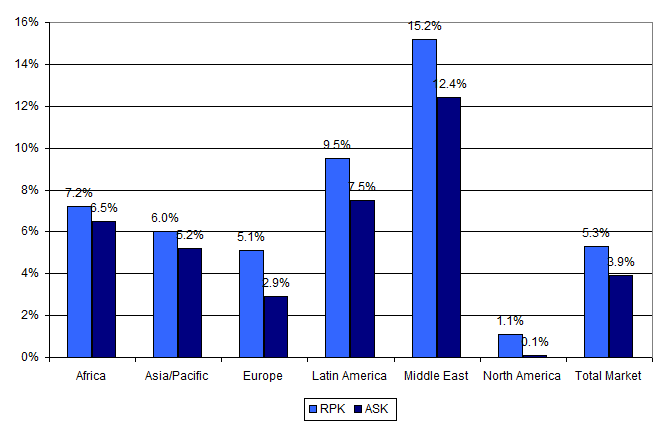 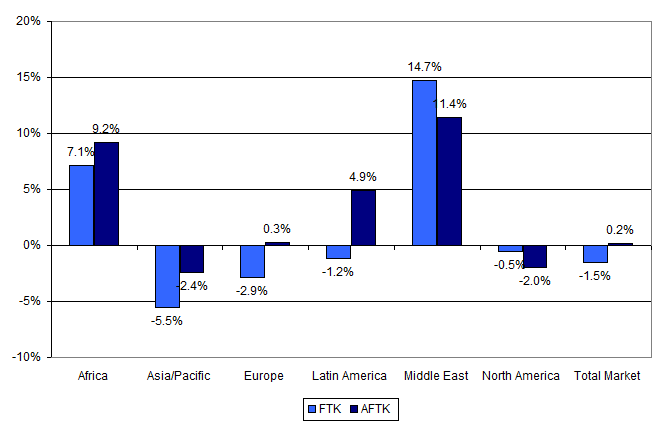 With global GDP growth in 2011 and 2012 at 2.5% and 2.2% respectively, noticeably below its long term trend rate of 3.1%, this relatively healthy passenger traffic growth is a little surprising. Three factors may help to explain this.

First, passenger traffic growth was very weak in 2008, at just 1.5%, and fell by 2.1% in 2009. Historically, after periods of weak or negative traffic growth, there is often a period where traffic bounces back and growth rates are a little higher than might be expected purely from looking at world GDP growth. Passenger traffic volumes, in absolute terms, recovered to pre-crisis levels in 2010 and are now comfortably above those levels (but they are not back to the level they might have reached had growth not been interrupted).

Premium traffic is soft – and softening

Second, the rate of growth in premium traffic (first class and business class cabins) was slower than growth in economy traffic in 2012. Premium grew by 4.8% in 2012 (5.4% in 2011), while economy grew by 5.9% on international routes (4.7% in 2011). The share of total traffic represented by premium passengers had fallen to 8.0% by the end of 2012 from 8.2% at the start of 2012 and 8.5% at the start of 2011. In 2007, before the global financial crisis, premium passengers accounted for 9.5% of the total, so the latest IATA data show not only that premium traffic has not recovered its pre-crisis levels, but also that it is continuing to slip away slowly. Overall passenger traffic growth may be ‘normal’, but ongoing sluggish global GDP is causing former premium passengers to spend less by booking the back of the plane.

Premium passengers as a percentage of total 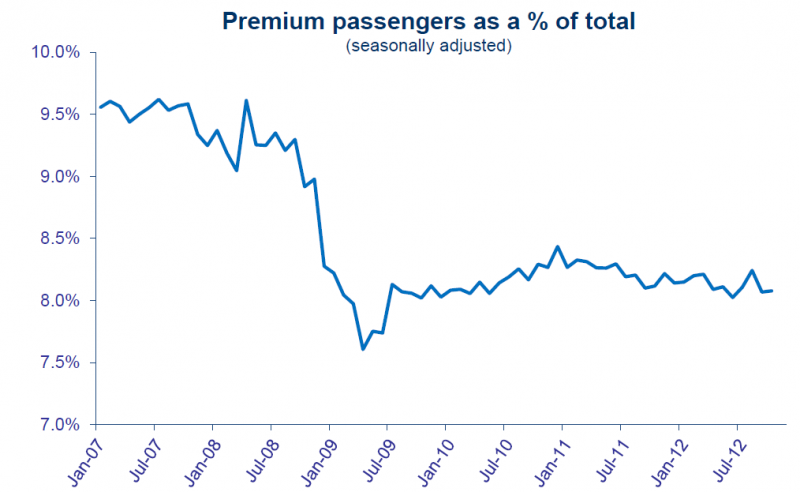 Third, cargo traffic remains very weak. It fell by 1.5% globally in 2012, with international cargo traffic down by 1.9% and domestic cargo up just 1.4%. World air cargo traffic has now seen annual declines in four out of the past five years. After falling in 2008 and 2009, cargo volumes recovered to pre-crisis levels in 2010 and even exceeded those levels for a while. However, they have since fallen from 2010’s peak to be just below pre-crisis levels.

Air cargo is sensitive to levels of world trade, which have been growing, but at slowing rates. So, while below trend economic growth has not been apparent in passenger demand patterns, it has had an impact on cargo demand. Air cargo volumes have been further hit by a modal shift towards sea freight as shippers look to cut costs whenever the speed of air transport is not essential.

IATA expects profits to increase in 2013, but margins remain thin

IATA’s airline industry traffic and profit forecasts for 2013 are based on projected world GDP growth increasing slightly to 2.3%, from 2.2% in 2012. It sees passenger traffic growth slowing from 5.3% in 2012 to 4.5% in 2013. Although IATA expects a modest uptick in world GDP growth, this below-trend rate of passenger traffic growth is not inconsistent with the below-trend forecast growth rate of GDP. Presumably, IATA sees the ‘bounce-back’ effect outlined above as having diminished. For cargo traffic, IATA forecasts growth of 1.4%, a modest return to positive rates.

With passenger load factors having reached an all-time high of 79.1% in 2012, IATA sensibly does not envisage any significant further improvements in 2013 and also forecasts a stabilising of passenger yield. Yield growth over the past three years has reflected modest capacity growth and the passing on to passengers some of the impact of rising fuel costs. It forecasts continued weakness in cargo yields (forecast down 1.5% in 2013). Traffic and yield forecasts combine to give a forecast 3.4% increase in global airline revenues to USD659 billion in 2013.

IATA’s forecasts see a modest fall in Brent crude oil prices from USD109.5 per barrel in 2012 to USD104.0 in 2013, with jet fuel falling from USD129.5 to USD124.3 per barrel and total fuel costs remaining more or less stable at USD210 million in 2013 (USD209 million in 2012). It assumes that non-fuel unit costs per ATK will remain flat to give a forecast of total non-fuel costs up 3.6% at USD430 million. This leads to overall operating costs forecast to be USD640 million, or growth of 2.6%, less than forecast revenue growth. Revenues minus costs gives an operating profit forecast of USD19.2 million, which is 40% higher than IATA’s estimated 2012 operating profit figure of USD13.6 million.

While the forecast growth in 2013 operating profit sounds spectacular, it represents an operating margin of only 2.9%. This is above the typical mid-cycle margin of around 2% for the industry, but is still insufficient to cover its cost of capital. After the payment of interest costs and taxes, IATA’s forecast for industry net profit in 2013 is USD8.4 billion, just 1.3% of forecast revenues.

Note that IATA’s profit forecasts are highly sensitive to changing jet fuel prices (among other things). On the fuel price analysis page of its website (last price update 08-Feb-2013), it notes that the new fuel price average for 2013 is USD132.9 per barrel (compared with its published forecast of USD124.3; see table below) and it estimates that this price would add USD11 billion to the industry fuel bill. If the fuel bill were to increase by this amount, it would almost wipe out forecast operating profit (all other things being equal). This suggests that the next revision to IATA’s 2013 profit forecast will be downward (unless yield growth can offset higher fuel costs).

IATA financial forecasts as of Dec-2012

IATA updates its financial forecasts every quarter, with its next update due on 20-Mar-2013. Note that its 2012 financial data are still estimates and are also subject to further revision.

In its last Airline Financial Monitor, published at the end of Jan-2013, IATA reported initial 4Q2012 profit data for a sample of 15 airlines that had reported so far. For these 15, operating profit fell from an aggregate USD2.0 billion in 4Q2011 to USD1.3 billion in 4Q2012.

In spite of this, and IATA’s overall estimate for full year industry operating profit falling from USD17.0 billion in 2011 to USD13.6 billion in 2012, it remarked that most indicators of profitability were moving in a positive direction in 4Q2012. These indicators included jet fuel price movements, which eased in late 2012, although they have been rising again so far in 2013 after the Financial Monitor was published. As noted above, IATA notes on its website that current fuel prices (last update 08-Feb-2013) would add USD11 billion to the industry’s 2013 fuel. 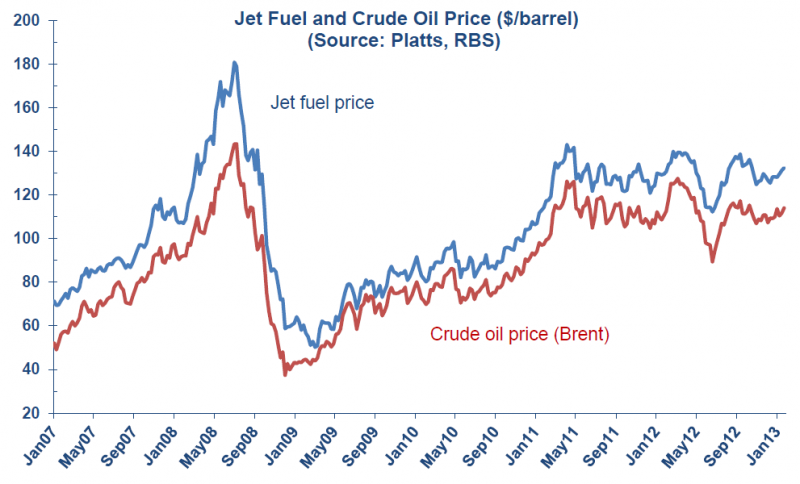 In addition, passenger traffic continued to grow and cargo traffic, while falling in 2012 as a whole, recovered to mid 2011 levels at the end of 2012. At the same time, passenger capacity growth remained below passenger demand growth and cargo capacity contracted. 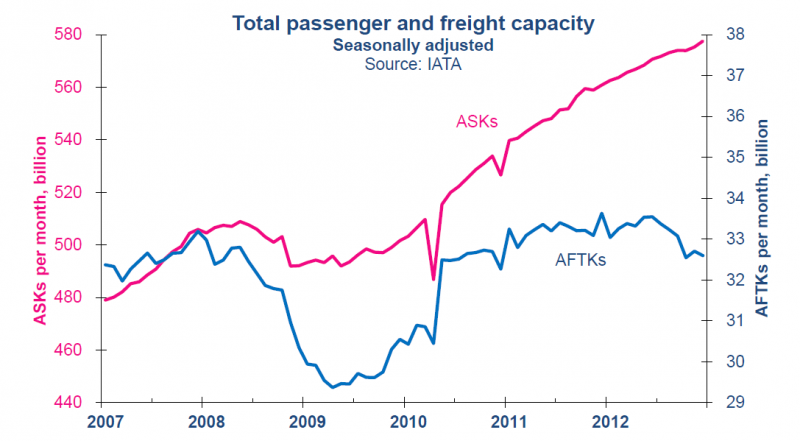 Both passenger and cargo load factors rose in Dec-2012, with seasonally adjusted passenger load factors remaining at near record levels throughout 2012. Passenger yields appeared stable in the US through most of 2012 and average return fares worldwide turned upward in the latter part of 2012. 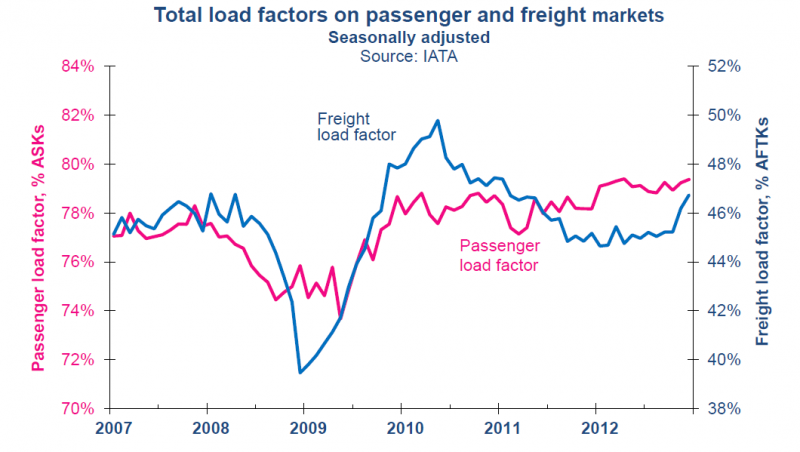 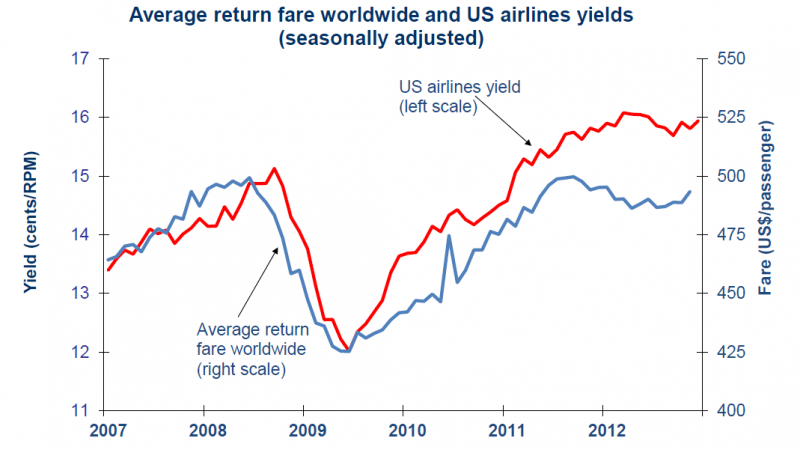 IATA’s note of caution in its last Financial Monitor arose from the growth in airline seats, which rose to around 0.8% month-on-month in Dec-2012, equivalent to an annualised rate of 10% and higher than in any other month of 2012. This reflected a high monthly delivery rate of 142 aircraft and a net 22 aircraft coming out of storage in Dec-2012. IATA observed that seat growth in December was above ASK growth rates and that a continuation of this trend could put downward pressure on asset utilisation. 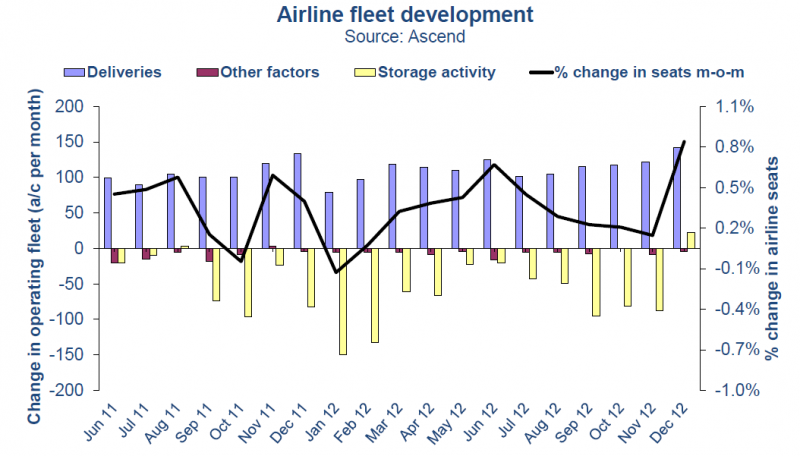 IATA’s assessment that indicators of profitability were mainly pointing upwards at the end of 2012, and its forecast of higher profits in 2013 compared with 2012, is supported by its most recent quarterly business confidence survey or airline CFOs and heads of cargo, published on 21-Jan-2013. Some 56% of respondents expect an improvement in profitability over the next 12 months, an indicator that has steadily improved since the beginning of 2012. 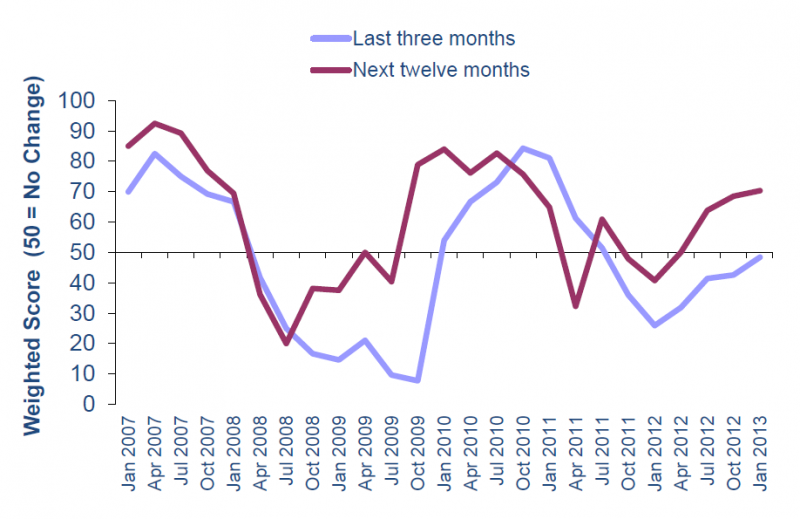 There is increasing optimism over both passenger and cargo traffic volumes.

On yields, confidence is improving for both passenger and cargo, although the starting position is different. The survey indicates that passenger yield was up in 4Q2012 and further improvement is expected in 2013 (although the level of improvement expected has remained almost the same since the start of 2012). The passenger yield expectations from the survey are more optimistic than IATA’s own 2013 forecast for flat yield (see earlier).

For cargo, yield fell in 4Q2012, but by less than indicated by the survey in the previous quarter. Cargo yield is expected to show no change in the coming 12 months, but the previous survey had indicated an expectation for a fall in yield.

Respondents expect no change in costs over the coming 12 months, meaning that any profit improvement is expected to be driven mainly by traffic volume growth and modest passenger yield improvements.

On employment, the survey points to a reduction in 4Q2012, after bigger reductions in the previous survey, but no further change in 2013.