In Sep-08, IATA forecast a global industry loss of USD5.2 billion for the current year. This was based on an average crude oil price of USD113 a barrel (USD140 for jet fuel).

But the outlook for 2009 is now a much rosier - albeit still negative - loss of USD2.5 billion industry wide. The main reason for the improvement? Drastically lower oil prices.

But demand still remains uncertain at best. IATA describes it as the "worst revenue environment in 50 years". As far as the airline industry is concerned, the 50 years might equally have been "ever".

2009 promises in fact to be a battle between the cost of oil and the level of passenger demand - both unpredictable, with considerable volatility.

Indeed, unless forward bookings improve from their current ugly levels, this alone will drive losses significantly higher. And, if the assumed oil price of USD60 a barrel is not achieved, things could easily look an awful lot worse.

In reality, the recent performance of each of these ingredients - both beyond the control of airlines - offers very little basis for making assumptions about next year. Any airline which thinks the IATA forecast represents the worst case scenario is likely to be in deep trouble this time next year.

Things have turned down much faster in the past three months than anyone predicted, with immediate impacts on traffic figures. Yields are falling quickly, behind that slowdown. 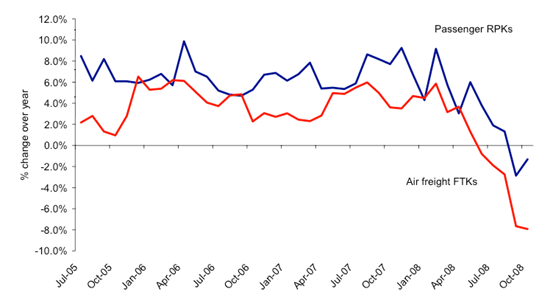 And IATA expects the worst performing region next year to be Asia Pacific. The region will, according to the projection, account for almost half of the global losses, a net loss of USD1.1 billion. It is also projected to be the only region in the world to suffer an operating loss, at USD600 million.

The oil price bubble burst makes all the difference

According to IATA, "the bursting of the oil and, more generally, the commodities price bubble was more dramatic than virtually all analysts expected...(W)hen we put our last forecast together at the end of August...we, and the ‘analyst consensus', took the view that softer economic growth would lead to oil prices averaging USD110 a barrel. We have now cut that forecast to USD60 a barrel for 2009, following an average USD100 a barrel this year."

At that time (Sep-08), the average price for the year to date was USD113 a barrel, or USD40 more than the average for 2007. That difference alone increased the industry fuel bill by USD50 billion.

The US will perform best - and fly less

The outlook for US airlines - despite operating some of the oldest aircraft fleets and intensifying competition - is actually a relatively highly favourable operating PROFIT of USD3.6 billion. The main reasons for the better expected performance are, necessarily - given the elderly fleets operated in the US - lower fuel costs and the progressive consolidation in the market. (Just like the bank bailouts, US carriers are being rewarded for their profligacy in not hedging their fuel - so that they are now immediately benefiting from the lower prices.)

Consolidation and individual actions by carriers are reducing the level of capacity in the US (although the IATA figures relate to "North America", it is US airlines that are the main contributors to the very large 5.7% capacity reduction).

...(unless the airlines now reintroduce capacity)

But we should never underestimate the ability of the industry to self-destruct; most of those capacity decisions were made when fuel cost well over USD100 and merely flying the geriatric aircraft meant guaranteed losses. There will be managements everywhere now reconsidering these decisions with fuel at around USD40, especially when the sniff of profitability is in the air.

Already self-destruction is apparent. Earlier indications had been that US carriers would reduce seats by over 10% next year, so this is already being peeled back - a nasty suggestion of things to come.

Elsewhere, capacity growth is a problem, as demand slows

Asia Pacific carriers have substantial orders flowing through over coming months. There is little they can do to avoid a resulting surge in capacity, other than to ground aircraft and reduce utilisation.

So long as fuel prices were high, they could justify doing this. But any airline runs the risk of losing market share - and even potentially profitable operation - if it under-uses its potential. And it is costly to have idle aircraft, where the prospect of selling them is next to nothing.
In Europe too, there are institutional reasons to keep flying, even though order levels are lower.

As IATA observes: "In other regions (than the US) capacity has proved harder to cut quickly. In Europe there is a danger of losing slots at congested airports if they are not used, while in Asia and the Middle East there are substantial numbers of new aircraft being delivered. As a result traffic is forecast to fall faster than capacity in all regions outside the US, leading to a fall in load factors and downward pressure on yields and profitability."

And the great unknown: demand

As IATA notes: "Just three months ago mainstream economists were forecasting that the US economy would be growing by about 0.5% and both Europe and Japan by 1.5% in 2009. All three major economies are now expected to shrink in their worst recession since the early 1980s.

Moreover, a much more substantial slowdown is expected in the previously robust emerging markets, including China and India. Overall, the forecast for global economic growth has been cut from 2.6% to 0.9%, which is the lowest growth rate since the 1981 recession. In the 1991 recession global growth was 1.5% and during the 2001 downturn it was 2.2%. "

With its current trajectory, economic growth looks set to have further falls in the next couple of months, in the absence of major intervention.

In those circumstances, and with the clear concern of major carriers at the shape of medium term forward bookings, there is worse to come.

As a lead economic indicator, cargo is generally reliable

As IATA Director General and CEO, Giovanni Bisignani, specifically noted the continuing contraction of air cargo traffic that started in June 2008. "Air cargo comprises 35% of value of goods traded internationally. The 7.9% decline in October is a clear indication that the worst is yet to come - for airlines and the slowing global economy."