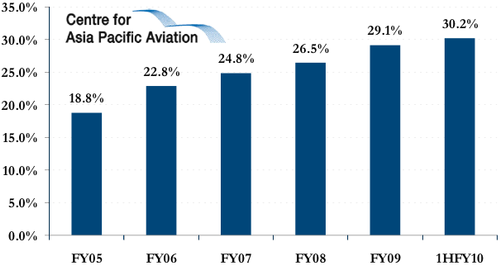 Revenues and profit reductions of under 5% in 1HFY2010

Revenues slipped 4.7% to USD557 million in the period, as airport charges slumped 15.5%, with security charges and aviation security services also down, by 5.8% and 5.6%, reflecting a reduction in aircraft movements and traffic at the airport. Commercial/Retail revenues, however, increased in the period. 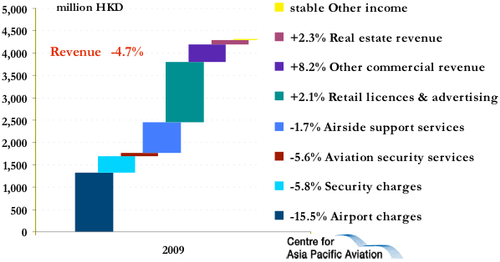 The reductions in the airport’s revenues and profitability levels were, however, less severe than the traffic reduction experienced at Hong Kong International Airport in the six month period, during which the airport was negatively affected by the global economic downturn, whose effects first impacted in 2H2008. 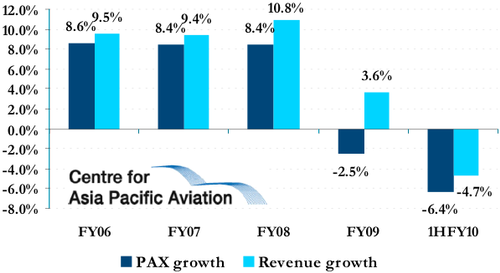 However, there was cause for optimism. The Airport Authority stated, “signs of market stabilisation and recovery have been seen in recent months, particularly in air cargo” - usually a good forward indicator of economic activity.

In Oct-2009, cargo volume recorded its first growth in 14 months (albeit off a substantial low), and Nov-2009 figures so far show a “strong rebound” in cargo services demand.

Upon the release of theses Oct-2009 traffic results, CEO, Stanley Hui, commented, “it is encouraging to see cargo throughput end the downward trend and increase by 1.3% in October. Though this is just a mild improvement made on Oct-2008 – which itself saw a drop compared to Oct-2007 – it nevertheless is an encouraging change for the better during a challenging time". 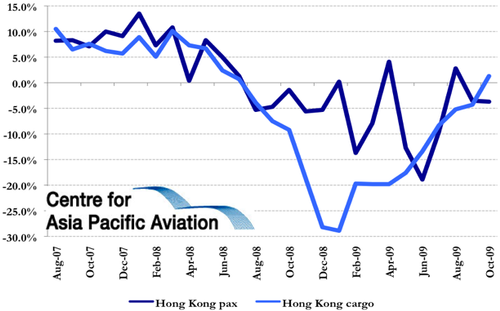 The CEO also expressed the hope the strong pre-Christmas growth momentum could last and give a further boost to the recovery of the industry.

Mr Hui added that airlines are now responding to the early signs of recovery by reinstating capacity or routes which had been reduced or suspended since the global financial crisis commenced last year.

Mr Hui added that the authority is “confident in the airport's long-term prospects as it is well positioned to capitalise on the tremendous growth opportunities arising from the Mainland's robust economy and the increasing economic integration between Hong Kong and the Pearl River Delta”.

The Authority is also working on a study on developing the midfield area to provide extra aircraft stands, apron facilities and a new passenger concourse to accommodate the rise in aviation demand when runway capacity grows to 68 aircraft movements per hour by 2015.