Hong Kong Airport’s major freight handlers, Hong Kong Air Cargo Terminals Ltd (HACTL) and Asia Airfreight Terminal (AAT), are finally seeing some signs of a stabilisation in volumes and are hopeful of the start of a recovery.

HACTL stated cargo throughput is “generally a good indicator of the economy” and while the first half of 2009 has been difficult, “it is delightful to observe the relatively stabilised tonnage performance over the past few months”. AAT stated, “the global economic recession continues, however, the total tonnage has shown some improvements, hopefully it’s a sign that we have already seen the worst." 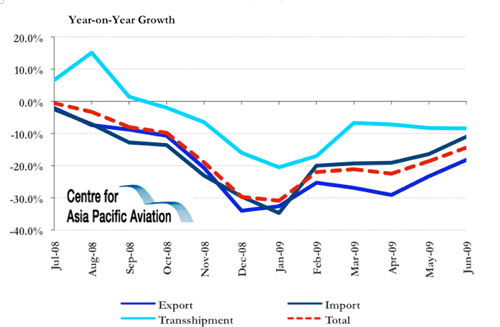 FedEx’s Guangzhou hub having an impact on HK transshipments?

HACTL’s transshipment volume fell 8.4% to 40,026 tonnes in Jun-2009 and this segment has been deteriorating modestly since Mar-2009 as the overall volume trend has improved. FedEx hub opened its intra-Asia hub in Guangzhou in Feb-2009, while further cross-Strait cargo services have been added between the Mainland and Taiwan in recent months.

Declining transshipment volumes will be of concern for Hong Kong, especially if neighbouring Guangzhou is the cause. A HACTL spokesman said, “looking beyond the economic crisis, it is more important for us to maintain a closer touch with our customers and support our business partners in an even more flexible and efficient manner, working together to reinforce Hong Kong’s role as the region’s preferred air cargo hub.”

Cathay Pacific seeing signs of airfreight market bottoming out, but a slow road to recovery exists

Meanwhile, Cathay Pacific General Manager Cargo Sales and Marketing, Titus Diu, stated that there are “signs that the airfreight market has bottomed out, though as yet we are not seeing any sustained upswing in demand”. 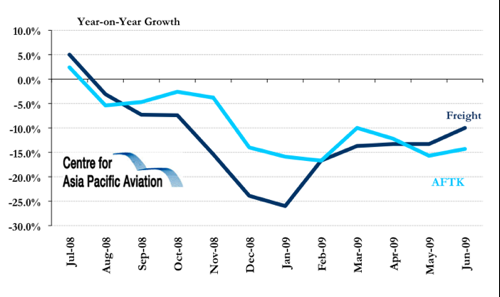 However, freight yields still remain depressed, with Mr Diu adding that “competition in the various cargo markets we serve remain fierce and as such yield remains under considerable pressure.” This yield issues is also apparent in passenger yields, with Cathay Pacific General Manager Revenue Management, Tom Owen, stating that premium cabin demand showed “no signs of life but was at least stable” in the month. Mr Owen added that “aggressive competition for Economy Class passengers in all markets continued to provide very few opportunities for sustainable yield improvement."

All signs indicate that there is a long and difficult recovery ahead of the carrier, with Oct-2009 freight traffic to be the major indicator of any significant economic and freight recovery, ahead of the usually peak end of year period.